The Embrace of Love: Being Gay in Ireland Now, a talk the author gave yesterday at Trinity College Dublin, addressed his experience of being a gay man and gay writer 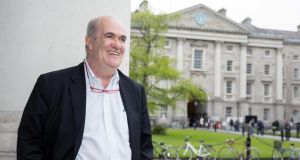 Colm Tóibín, at Trinity College Dublin yesterday, on fellow authors Kate O’Brien and John Broderick: “both did their best by trying to stay in Ireland and deal with their own homosexuality in their novels. Both were followed by demons of varying sorts. Both left Ireland finally towards the end of their lives to live unhappily in provincial England.” Photograph: Paul Sharp

The talk, entitled The Embrace of Love: Being Gay in Ireland Now, focused on the representation of same-sex relationships in Irish and international literature, his experience of being a gay man and gay writer in Ireland and the recent social, cultural and legal changes relating to same-sex relationships in Ireland. In his lecture, Tóibín discussed EM Forster, Roger Casement’s diaries, Oscar Wilde and Senator David Norris’s battles in the Irish courts in the 1980s.

He focused particularly on two Irish writers, Kate O’Brien and John Broderick, who he said “both did their best by trying to stay in Ireland and deal with their own homosexuality in their novels. Both were followed by demons of varying sorts. Both left Ireland finally towards the end of their lives to live unhappily in provincial England.”

Colm Tóibín: The Embrace of Love: Being Gay in Ireland Now

On the experience of being a gay man in Ireland he said: “In Ireland until recently gay people had a way of living in the shadows, not declaring ourselves. We had a sort of secret city – bars and discos, bath houses, websites, places of assignation - and some of us had become skilled at moving between these places as though we were invisible. Invisibility became part of a survival mechanism. Its downside was that people simply did not know about us, and more importantly, did not know that our way of loving has the same contours and textures as anyone else, the same fears and intensities, the same needs and comforts. One of those needs includes the need for the same rituals and the same constitutional protection as other people.”

The author challenged how the homosexuality of gay writers had been ignored or underplayed by even sympathetic critics, and called for a more understanding approach: “As gay people become more visible and confident, and gay politics more settled and serious, then the history of what happened to us in the past becomes a vital element in gay identity, just as Irish history does in Ireland, or Jewish history among Jewish people. It is not simply a question of finding obscure traces of gay presence in the past, although that as well, but it includes writers who were clearly or uneasily gay, and whose homosexuality, has a considerable bearing on the themes and tones in their work. Straight critics, including ones who mean no harm, have tended to write about gay authors as though they were straight, or as though it did not matter.

“The gay past in writing is both explicit and hidden in a way that the gay present is, for the most part, only explicit. Soon in the western world being gay will no longer involve difficulty and discrimination. Therefore, how we read the past and read into the past and judge the past are likely to become matters for great debate. The temptation to make anachronistic judgments and ask anachronistic questions is hard to avoid. Why didn’t Thomas Mann come out? Why didn’t EM Forster publish his only explicitly gay novel Maurice in 1913 when he wrote it? Why didn’t the gay critic FO Mathiessen include references to gay writers in his book American Renaissance? And also, why are gay lives presented as tragic in so much writing? Why can’t gay writers give gay men happy endings, as Jane Austen gave heterosexuals? Why is gay life often presented as darkly sensational?”