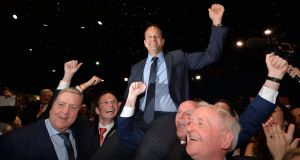 Leo Varadkar is hoisted on shoulders after being elected as leader of Fine Gael at the Mansion House, Dublin. File photograph: Alan Betson/The Irish Times

In order to persuade Fine Gael members of their merits, Leo Varadkar and Simon Coveney took part in debates in May 2017 when they were seeking the leadership of the party following Enda Kenny’s departure. This book devotes barely two pages to these debates and even then is much more interested in the optics than the ideas the respective candidates put forward, beyond telling us that Coveney had a vision inspired by the 1960s “Just Society” blueprint and Varadkar hoped the debates “would be almost boring; policy-heavy debates rather than emotional”. This is just one example of the degree to which this book is far more preoccupied with superficialities than any depth of analysis.

Perhaps such flimsiness is not surprising; it is far too early for a biography of Varadkar to be anything more than a light dissection of slim pickings. It is almost amusing to read one of the endorsement blurbs for the book: “An absorbing read that charts the highs and lows of an extraordinary political career.” Varadkar, still not 40, and only 15 months as Taoiseach, has not had an extraordinary political career; whether he will have one remains to be seen. Having an Indian father and being the first openly gay Taoiseach make Varadkar’s story interesting, but are not signifiers of a political giant amongst Lilliputians.

8 Róisín Ingle: How are you? Three little words that hold more weight than ever

9 Michael McDowell: Time to wake up and smell the coffee over Sinn Féin

14 Will income taxes have to rise to pay for Covid-19 crisis?

22 Netflix: 10 of the best new shows and films to watch in December

32 Kevin McStay: Beautiful chaos of All-Ireland to end in a Dublin-Mayo final

35 Covid-19: Time for Government to reassess strategy for tackling pandemic

40 Sitting pretty with sea views on Shankill Beach for €1.3m