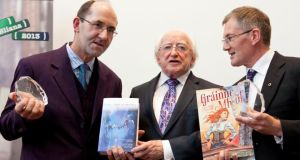 “The West is awake – and writing” was the message in Dublin last night when the “Gaeilgeoirati” gathered to celebrate Irish-language publishing in the annual Leabhar na Bliana ceremony.

President Michael D Higgins was in attendance to give the top awards to two books from publishers in the west: Leabhar Mór na nAmhrán, which won Gradam Uí Shúilleabháin best book in Irish for adults; and Gráinne Mhaol, which was awarded Gradam Réics Carló for the best publication for young readers.

Connemara-based Cló Iar-Chonnacht have produced a bible of a book in Leabhar Mór na nAmhrán, the big book of songs, with 400 sean-nós songs from the four corners of Ireland brought together under one cover. Collected and edited by Micheál Ó Conghaile, Lochlainn Ó Tuairisg and Peadar Ó Ceannabháin, the book contains the complete text of each song with notes on who composed them and where they originated.

The text, written by Brazil-based Gisela Pizzatto and illustrated by Bruno Bull, has been translated into Irish by Donegal native Iarla Mac Aodha Bhuí.

Leabhar na Bliana organiser Liam Ó Maolaodha praised the “mysterious meitheal that brings together writer, editor, publisher and designer” to give life to a book. The awards are sponsored by the North-South language body Forás na Gaeilge, whose chief executive, Ferdie Mac an Fhailigh, said the standard of Irish-language publishing was getting better “each year”.

Finding the Way Back: A career-best performance from Ben Affleck
3