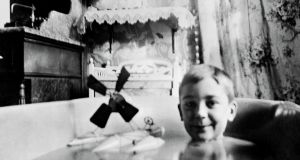 Jacques Henri Lartigue was one of the greatest photographic artists of the 20th century, but we very nearly missed him. It was not until 1963, when he was about to turn 70, that the Museum of Modern Art in New York put on his first major exhibition. It was a sensation, as they say; here was a collection of masterworks dating back to the turn of the century that for decades had been known only to a handful of people, but that now were given to the world. “It was one of the most moving experiences of my life,”’ Richard Avedon said of the MoMA show.

Of course, it wasn’t quite that simple. In the same way that Henri Cartier-Bresson prized his own never-more-than-mediocre drawings over his photography, so Lartigue liked to think of himself as a painter who amused himself by taking amateur photographs. He had the dilettante’s disdain for careerism – “I detest those who become painters [and photographers too, no doubt] as one does a telegrapher or a baker”– and fostered the notion of himself as the “primitive” that John Szarkowski, the curator who put on the 1963 MoMA show, had taken him to be.

1 John Cleese has a faulty sense of humour about the Irish
2 Pygmalion pub mired in weekend social distancing row
3 Why are markets booming when a crash is on the way?
4 Ireland has lowest current incidence of Covid-19 in western Europe
5 Sinn Féin leaders reject criticism of O’Neill’s behaviour at top republican’s funeral
6 Bobby Storey: The IRA's planner and enforcer who stayed in the shadows
7 Covid-19: Fianna Fáil’s John Lahart is first TD to wear face mask in Dáil chamber
8 Ghislaine Maxwell arrested on charges of helping to lure girls for Jeffrey Epstein
9 How much do Irish people earn? And what will Covid-19 do to our wages?
10 Health officials ‘very concerned’ about foreign travel, says Donnelly
11 These viral news clips make me thank God none of my parenting is televised
12 Shared parenting: fathers being forced to go down ‘adversarial route’
13 ‘Ten of the best books set in Ireland’: Does the Guardian get it right?
14 ‘I felt something furry move under my hand. Man alive, I am terrified of rats’
15 Pub substantial meal rules a ‘farce’ like being on set of Darby O’Gill and the Little People
16 Irish holidaymakers have been thrown under the bus
17 Sentence for attempted murder by teen in Dún Laoghaire too lenient, court finds
18 Covid-19: Northen Ireland reports one death and seven more cases
19 World, look away now – these are dark days for the United States
20 Man who propelled partner down stairs gets 16 years for murder
21 Ex-lovers in dispute over alleged movement of horses worth up to €4.5m
22 Netflix: 10 of the best new shows and films to watch in July
23 Government deficit balloons to €5.3bn on back of Covid spending
24 Limerick people ‘grossly insulted ’ by Micheál Martin appointments, says Willie O’Dea
25 McDonald ‘would still go’ to Storey funeral if serving as taoiseach
26 Sunday Times Audible Short Story Award won by Irish author for two years running
27 Sex, swearing and flushing the loo: How these films broke big-screen taboos
28 Readers on overseas travel: ‘I am responsible enough to go and manage the risk of Covid’
29 Drumcondra credit union collapses as merger plan fails
30 Trump says Covid-19 will disappear after US reports record increase
31 Coronavirus: Three more deaths, six new cases confirmed in Republic
32 Story of movement by Adrian Donohoe murder accused is ‘bunkum’, court told
33 Full line up of junior ministers unveiled as Taoiseach accused by one TD of snub
34 Greens criticised over moving biodiversity brief to housing department
35 Thousand acre Offaly farm guiding €9m biggest land sale in years
36 Woman who said ‘I have the virus’ and coughed in direction of paramedics jailed
37 Who are the new junior ministers? All their profiles are here
38 Could your old car be giving away all your secrets to its new owner?
39 Ireland’s Covid dead: Bill Taylor was a Bohemians player and a man of learning
40 ‘Grossly irresponsible’- Waterford mayor condemns house party of 60 people
Real news has value SUBSCRIBE