This week, to mark the end of our How to Write a Book series, we have a daily Q&A with a debut author 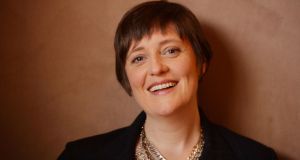 Léan Cullinan has been writing since childhood and is a graduate of the MPhil in Creative Writing at Trinity College Dublin. Her debut novel is The Living. She lives in Dublin with her husband and two sons.

What was the first book to make an impression on you? The first book I read all by myself was a one-volume edition of Alice in Wonderland and Through the Looking Glass. I remember kneeling at the footstool in my grandmother’s livingroom, with the book on the upholstered surface in front of me. I finished reading the last page, closed the back cover, hefted the heavy hardback and flipped it over, then opened the front cover and started reading again from the beginning.

What was your favourite book as a child? When I was maybe eight my grandmother suggested I read a particular book from her well stocked shelves, and I solemnly told her, “No thanks, I only read magic.” I was quite the junior folklorist, for many years subsisting on a diet of Andrew Lang’s Fairy Book collections, Italo Calvino’s massive edition of Italian folk tales, and a volume of Russian fairy tales with pages as thin as onion-skin.

And what is your favourite book or books now? I love Ford Madox Ford’s The Good Soldier, Virginia Woolf’s Mrs Dalloway, and everything I’ve read by George Eliot. Maybe The Mill on the Floss especially. I also have an abiding affection for the work of Dorothy L Sayers, PG Wodehouse, Arthur Conan Doyle, Diana Wynne Jones and Ursula K Le Guin. For starters, like. I think I’m easy to please.

Who is your favourite fictional character? Reginald Jeeves. Sherlock Holmes. Granny Weatherwax. Apparently I have a weakness for infallibility.

Who is the most underrated Irish author? What does “underrated” mean? I love what I’ve read from Claire Kilroy and Biddy Jenkinson, and I don’t often see them in the spotlight.

Which do you prefer – ebooks or the traditional print version? I like them both for different purposes. Paper books are my first love, but electronic is handy for reading while eating or making notes, because I can prop the device up and leave both hands free. I don’t like when I’ve been reading an ebook and then find myself tapping the edge of a printed page to try and make it turn.

What is the most beautiful book you own? A leather-bound volume of The Ladies’ Treasury from 1859. It’s a Victorian women’s magazine, copiously illustrated, full of serialised novels, fashions of the month, needlework projects, educational series on history and geography, advice, gossip, recipes and so on. It’s entirely delicious. Where and how do you write? At my stupidly chaotic desk in our stupidly chaotic study, using an excellent piece of software called Scrivener. I mostly work in shortish chunks of time. I try to churn out a first draft as quickly as I can, so I can move on to the rewriting, which for me is the best part.

What is the most research you have done for a book? Having just published my first book, that would be the one I’ve done the most research for. It wasn’t a hugely research-heavy book. I did use the Google Chrome “incognito window” feature quite a bit when reading up on dissident republicanism, not wishing to give the advertising algorithms the impression that I had a personal interest.

What book influenced you the most? Surely a question for my biographers? I don’t know. Winnie-the-Pooh?

What book would you give to a friend’s child on their 18th birthday? How to Suppress Women’s Writing by Joanna Russ. Because they need to know that.

What book do you wish you had read when you were young? Witch Week by Diana Wynne Jones. It made me cry in my 20s; I can only imagine what it would have been like to encounter it when I was still at school.

What advice would you give to an aspiring author? Learn to love rewriting, and never stop aspiring.

What weight do you give reviews? A review stems from a careful reading of the book, which is a valuable thing in itself. That said, I find it comforting to imagine that there exists an ideal audience for my work, and therefore that a reviewer’s reaction tells me more about whether they’re a member of that audience than about whether what I wrote was any good. I have no truck with the politics of canonicity.

Where do you see the publishing industry going? I suspect that reports of its impending death are at least somewhat exaggerated. For instance, I often hear that editing is a thing of the past, but I’ve had superb editing at all stages. Human information must flow, and we need mechanisms and structures to facilitate that. Savvy business people will find ways to position themselves where they can add value. Publishing as we know it is evidently in a transitional phase at the moment. Who knows where the chips will fall?

What writing trends have struck you lately? I’m so not a trend-spotter. I recently read Emma Donoghue’s Room followed immediately by Jo Baker’s Longbourn, and the experience sparked many thoughts about home, the physicality of the home space, familiar objects, and how modernity – and, more specifically, the (theoretically) universal availability made possible by the internet – has disrupted our relationship with them. Two novels don’t exactly constitute a trend, though.

What lessons have you learned about life from reading? Story is one of the most powerful communication tools we have. You can say things using story that are not easy to say in any other way.

What has being a writer taught you? Nothing is ever the whole story.

Which writers, living or dead, would you invite to your dream dinner party? Geoffrey Chaucer, William Shakespeare (+1, because wouldn’t you be dying to know who he’d bring?), Maria Edgeworth, Toni Morrison, Oscar Wilde (and his ma, why not), George Eliot, Samuel R Delany, Mary Shelley (and her ma), Winifred Holtby, and Margaret Cavendish, Duchess of Newcastle. I’m looking forward to this, now. Let me know if you’d like to join us.

What is the funniest scene you’ve read? It’s got to be something by PG Wodehouse. Maybe the climax to The Code of the Woosters.

What is your favourite word? I once had a hoodie custom-made with “sesquipedalian” emblazoned across the front. A badge of honour.

If you were to write a historical novel, which event or figure would be your subject? In the library of the Royal Irish Academy there’s a set of diaries, dating from the early 19th century, written by two young Anglo-Irish ladies who travelled to Moscow and spent some years in the entourage of Princess Dashkova, a close personal friend of Empress Catherine the Great. Clearly, someone needs to write a novel based on these texts. Maybe one day I will . . . unless you’re up for it?

Take the first step to your debut novel with the Irish Times How to Write a Book series.