Jonathan Swift: The Reluctant Rebel review: A riot of sentiments 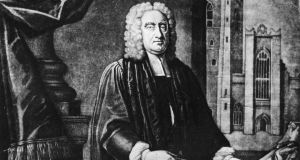 Jonathan Swift: Dedicated Swiftians, indeed, may also be divided into two camps, on the question of a carnal or a virgin dean. Photograph: Hulton Archive/Getty Images)

Jonathan Swift was born in Dublin on November 30th, 1667 and died there on October 19th, 1745. The external events of his life, his ups and downs, are well known, but scholars differ when each event comes to be interpreted, made to appear significant in a coherent story. The main problem arises from the contradictory quality of Swift’s sentiments: he can be quoted on every side of a question. He was a skinflint three days a week, generous nearly to a fault on the other four. A Whig betimes, he was a Tory for most of his life. His affections were bizarre. John Stubbs refers to “his life-long tendency to swipe with one hand at what he clutched, tightly and jealously, with the other” (188). Faced with these contradictions, his biographers have tended to reduce them to a single plausible story, claiming that one element is the real thing, the contradiction superficial.

Dr Stubbs, born in England, has spent much useful time in Ireland. I like to think that he is a long-distance descendant of the John William Stubbs who wrote The History of the University of Dublin (Dublin, 1889). He is notably learned in the social history of Ireland in the dreadful 17th and 18th centuries. He is also, if my memory is on duty, the only biographer of Swift who mentions Oliver Plunket, Archbishop of Armagh. Evidently, he has followed Swift’s footsteps from Dublin to school in Kilkenny, then to Dublin University. He alludes, with cause, to “Swift’s sulky, self-sabotaged showing at Trinity College” (229). Ordained priest of the Anglican Church on January 13th, 1695, two weeks later Swift was presented to his living, the prebend of Kilroot in the diocese of Down and Connor, on the northern shore of Belfast Lough, a church, as Stubbs reports, “little more than a roofless heap of stones” (155). In Belfast, during his dreary year at Kilroot, Swift met Miss Jane Waring and in reasonably short order proposed marriage, subject to a time limit on her acceptance and further conditions. She hovered, missed her chance, and he returned to Sir William Temple’s Moor Park. This proposal of marriage was the only one that Swift was to make: once was probably enough.

Jane Waring (“Varina”) has been treated severely in several biographies of Swift, but Stubbs is sympathetic to her. Violence is not in his style. He tends rather to be mellow if at all possible. When different views of an action insist, he distributes the considerations as an impartial judge would, and invites readers to weigh them accordingly. I found mildly shocking one of the few occasions on which he committed himself to a decision, that “as a writer overall Samuel Johnson trails far behind Swift” (624-625). Trails? Far? Behind? I have never felt obliged to award that palm. He is much more even-handed in his dealing with the two Esthers, the most contentious question in a biography of Swift.

Esther Johnson (“Stella”) was eight years old when Swift, in his 22nd year, arrived at Moor Park. She was, Stubbs says firmly, the eldest child of Temple’s housekeeper, Bridget. Her late father, Edward Johnson, had been Temple’s steward. But Stubbs also glances at a notion that I recall making a great stir in Dublin when it was first heard:

One much disputed and still compelling book, Denis Johnston’s In Search of Swift (1959) suggests that Jonathan and Esther were Temple’s natural children. The theory folds in a void of evidence, but it provides a fascinating and insightful way of viewing the familial bonds and dependences that formed in these years at Moor Park (176).

“Folds” I read as “collapses.” Stubbs half-wishes that Denis Johnston’s theory were well founded. “Stella,” he says, became Swift’s closest companion, “the nearest to a wife that he could bear” (465). He loved her, but did not propose. She died on Sunday, January 28, 1728. Her requiem was held in St Patrick’s on Tuesday. Swift noted: “This is the night of the funeral, which my sickness will not suffer me to attend” (505). The sickness could be one of many, but it included sickness of heart. At various times he suffered from Ménière’s Disease, orbital cellulitis, vertigo, and gout. Descriptions of his behaviour in the last years make me think he also suffered from Alzheimer’s. Some of those who saw him then believed that he had sunk into idiocy.

Esther Vanhomrigh (“Vanessa”) was an altogether different woman from Esther Johnson; fierce and demanding in her love of Swift. Then there is the question of “coffee”. The correspondence between Swift and “Vanessa” contains a bewildering number of references to this drink. Stubbs writes:

On reading them more than 40 years later, Horace Walpole had no qualm in asserting that coffee meant sexual intercourse. The theory found many adherents over the years. Dedicated Swiftians, indeed, may also be divided into two camps, on the question of a carnal or a virgin dean. The arguments on both sides are compelling, though the question of caffeine and sex reflects a somewhat unscholarly if altogether human wish for a trace of fulfilment in a somewhat bleak pattern of events (423).

In other words: he hopes, by the narrowest of margins, that Swift and this Esther made love.

Whatever the deniers say, there is an unmistakable afflicted sexuality running through their correspondence. . . The libidinous energy of the letters – teasing, pleading, threatening, punishing, sharing and consoling – is undeniable (424).

This riot of sentiments is, I feel certain, what Swift and his companions called raillery, a social practice, an intense degree of banter that I hope civilized people have discarded (though a friend of mine, long lost to me, had a distressing flair for it). Laetitia Pilkington, who knew Swift well in his later years, describes a dinner party at the Dean’s where her husband and she were the guests:

“Mr Pilkington,” says the Dean, “you would not tell me your wife’s faults; but I have found her out to be a damned, insolent, proud, unmannerly slut.” I now looked confounded, not knowing what offence I had committed. Says Mr Pilkington, “Ay, Sir, I must confess she is a little saucy to me sometimes, but – what has she done now?” “Done! Why nothing, but sat there quietly, and never once offered to interrupt me. . .” This raised my Spirits, and as I found the Dean always prefaced a Compliment with an Affront, I never afterwards was startled. . .

That is a fine definition of raillery, to preface a compliment with an affront. There is more to be said about this noxious practice, which Swift evidently loved.

Lest I distract myself: John Stubbs’s book is very good, a fine achievement in an admirable genre, social and personal history.