Growing up in Madrid under Franco, novelist Javier Marías secretly mocked the fascist leader. The period after Spain’s transition to democracy is the setting for his latest book 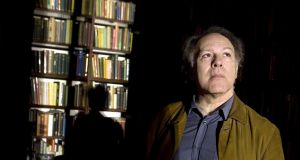 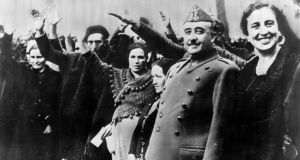 General Franco and his wife being saluted. Photograph: Keystone/Getty Images

The year 1980 was an exhilarating time to be alive in Spain. General Francisco Franco had died five years earlier, in November 1975. There followed an unexpectedly smooth transition to democracy after almost 40 years of fascist rule.

The modesty demanded by his dictatorship and the Catholic Church was shed. There was a feeling of effervescence in the air, especially in Madrid where Movida, a countercultural movement in the arts, fashion and social behaviour, flowered. “Madrid never sleeps,” was its war cry. The city’s streets always seemed to be full, with traffic jams a familiar occurrence in, for example, the early hours of a Wednesday morning.

Although the fear of a coup d’état lingered, there was a giddy sense of promise. The future was up for grabs. Everything seemed possible, except divorce, which was not legalised until 1981. It is marriage’s get-out clause – or the lack of it in 1980 – upon which Javier Marías builds the story for his 13th novel, Thus Bad Begins.

“During my childhood and early youth,” he says, “I knew some married couples whose story and relationship were not very different from those portrayed in the novel, Eduardo Muriel and Beatriz Noguera – people who stayed together, at least partly, because divorce was not allowed in Spain. They had harmed or deceived each other, and yet they were aware they would never be able to start a fully new life with someone else.

“Then there was this idea that when deception has lasted too long, probably the worst possible thing to do is to put an end to it. We have lived what we have lived, and that cannot be cancelled, erased, suppressed. What can we do with our lives (or with a substantial part of them) if we discover they were based on a lie? Perhaps it is better to go on with the fiction, once the fiction is our life. Or has become our life.”

Eduardo wears an eye patch. He sizes up the world through “his wise eye”, notes the narrator Juan de Vere, his 23-year-old secretary. When he is not running movie business errands for his master, Juan engages in a Socratic dialogue with him on the vagaries of adult life. Eduardo, “the kindest, most upright man”, according to Juan, is, however, unaccountably cruel to his wife Beatriz, a mystery that remains unsolved until the novel’s final pages.

Eduardo is mystified by a disturbing rumour he hears about his friend, Dr Jorge Van Vechten, a lecherous womaniser. “You might say that age . . . has failed to teach him its usual soothing lessons,” writes Marías. The doctor disarms people with a broad smile and a big, booming mechanical laugh, but a murky past in the civil war – as a member of General Franco’s intelligence unit and later as an informant – threatens to catch up with him.

The Spanish civil war, which started in July 1936 and lasted for three years, is where a lot of Spain’s secrets are buried. After it ended, people switched allegiances swiftly. “Never have there been so many turncoats, such a mass display of turncoatery,” says Eduardo in the novel.

When General Franco died there was no reckoning. The country passed an amnesty law in 1977 forbidding the prosecution of civil war crimes. A pact of silence was enshrined. The younger, 17-year-old brother of Marías’s mother was killed “for nothing” during it. Marías says it is pointless, however, to ask whether the amnesty law was a good or a bad solution.

“It was the only possible thing to do, at the time, if we did not want new bloodshed. It is explained in a brief chapter in the novel – after Franco’s death the only people with arms were in the army, who were mainly Francoist back then. Nowadays some young people seem to ignore that Franco was never defeated. He died in bed, more or less peacefully. He was no Mussolini or Ceausescu. The amnesty law implied many renunciations, and some injustice, for sure, but in the end it was quite sensible.”

Marías, who is regularly touted as a possible Nobel laureate and is one of a handful of living authors on the Penguin Modern Classics roster, was born in Madrid in 1951, the fourth of five boys in his family. He remembers General Franco as a buffoonish figure during his childhood.

“He always seemed ridiculous – a very short, bald, ugly man, with a monotonous, shrill voice. In that sense, it was difficult to be frightened by him. At the same time, at least I knew there were reasons to be frightened, as the police imprisoned my father immediately after the end of the civil war; and the state punished him professionally. My family did not belong to the winners, that I knew, and I knew we had to be careful. But, privately, my brothers and I tended to mock him, more than anything else.”

His father, Julián Marías, was a noted philosopher. He was thrown into prison because of his republican sympathies; a close friend betrayed him, reporting him to Franco’s police. He was lucky to escape the firing squad as Franco executed thousands of his opponents as late as the 1950s.

Marías wrote a fictionalised version of his father’s incarceration in his novel Your Face Tomorrow. After his father’s release from prison, he was banned from teaching in Spain, and from writing newspaper columns, which forced him to spend years shuttling back and forth to the US to lecture at its universities, including Yale.

Marías, too, spent a swathe of time on university campuses. During the 1980s, he taught translation theory at Oxford. He got going early as a novelist, writing his first couple of novels at a very young age. He wrote The Dominions of the Wolf and Voyage Along the Horizon (both of which were published) before he was 21. He also won plaudits for translation work, including a Spanish national prize for his version of Laurence Sterne’s Tristram Shandy in 1979.

Awards have followed him around. He won the International Impac Dublin Literary Award for A Heart So White in 1997 and he caused a stir in 2012 when he refused to collect one of Spain’s most prestigious literary prizes, the Premio Nacional de Narrativa, for his mystery novel The Infatuations. Instead of collecting his €20,000, he used the occasion to denounce Spain’s government for cuts in the arts and culture.

Marías lives in an apartment close to Plaza Mayor in central Madrid. It is free of internet; he favours the whirring sound of a fax machine to attend to his administrative chores. He writes on an electric typewriter. The apartment is lined with bookshelves, his books organised according to country of origin.

He looks fondly on Irish literature. He translated WB Yeats’s The Celtic Twilight, which he describes as “a wonderful book”, into Spanish. “I also love Swift, Wilde and Heaney,” he says. He has mixed feelings about Joyce, though, thinking that his novels are contrived, “even pompous”, as he said during an interview for Paris Review.

“I do not really like Ulysses,” he tells me, “but The Dead is one of the best stories ever written, and it is constantly in my mind.”