Eimear McBride’s debut novel, A Girl Is a Half-formed Thing, took 10 years to get published, in which time she felt she had failed. That it has won the Kerry Group Irish Novel of the Year award is more than simple vindication 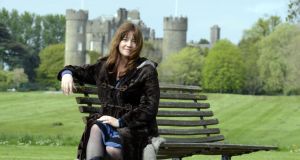 ‘No one had wanted to give the book a chance.’ Eimear McBride at Malahide Castle. Photograph: Dave Meehan

Eimear McBride is sitting down. At first glance she appears calm, even serene. But a closer look suggests she may be feeling relieved. She agrees that she has gone beyond simple vindication. “I always believed in my book, but it got hard and harder. And, well . . .” Her sigh is followed by an expressive shrug.

The busy bar we meet in could as easily be a waiting room at a railway station. McBride spent a great deal of time waiting and wondering. “I felt like I’d failed, wasted my time. Or rather, no, I didn’t feel that I had wasted my time; I felt that my time had been wasted. No one had wanted to give it a chance; I had people saying they liked it but didn’t think they could sell it.”

It is a familiar complaint among writers. As readers, however, we don’t tend to give much thought to the publishing process: we think of books as wonders, not sales units. Is fiction only a product? She smiles her world-weary smile. In the years before winning the inaugural Goldsmith Prize and this year’s Kerry Group Irish Novel of the Year award (which I adjudicated, along with David Park), as well as having been shortlisted for three other prizes (the outcome of two are still pending), she had learned a great deal about the complicated relationship that exists between the act of writing and the business of publishing.

There is a brief silence before I ask her to read to me from the book, and she does, in a low, resonant tone that is steady and confident, alert to the staccato rhythms of her narrative, a cryptic, theatrical, at times shocking inner monologue issuing from an unnamed girl who is damaged yet determined to make her own decisions.

“I wanted to act and I did my three years at Drama Centre London. It wasn’t easy,” she says. “We did 10 hours a day. It is a very intense experience. It was a method school, so you are using every part of your body and your mind, your emotions. You react to language, break it down. Simplify it.” She may as well be speaking about her challenging, driven novel. “Exactly, that’s why I wrote it like that. Words are about emotions, articulating sensations. We don’t think in perfect sentences.”

McBride is 37 and is easy company, far less intense than A Girl Is a Half-formed Thing. Yet she is logical, as deliberate as a scientist. It is difficult to imagine her acting. “It’s funny, I really did want to act, and loved the idea of becoming these various characters, trying to get to the essence of them.

“Then, about six months after I had graduated and I was ready to begin a career, my brother Donagh [to whom the book is dedicated] became ill, and he died after about a year. He was 28. Suddenly I wasn’t interested in acting any more, and I felt I had to change everything about my life. I had to figure out what I was going to do with myself. Nothing could be the same any more.” She became a writer.

But before that she had acquired some history. McBride’s parents had moved to England from Northern Ireland. “I was born in Liverpool. I’m the third of four – two older brothers and a younger one. Donagh was the second eldest. My mother is from Belfast, my father came from Ballycastle, and I was born in Liverpool. But we moved to the west of Ireland. I grew up in Tubbercurry, in Sligo, so I am Irish all right, and it is odd being asked if I feel English. I even did the Leaving Cert.”

Her father died when she was eight and she feels that that may have directed her towards acting. “There is a connection; acting is about escape and control, of feeling safe and secure. It’s a place for difficult emotions, and there was a loss of security when my father died. I felt I could regain that security in acting and I did, I think, find a kind of security. Certainly there was a sense of control in it. But all that was blown apart after my brother died.”

Does she owe her physical response to language to that performance training? “I’ve no doubt about that. I think – I know – that had I gone to university and studied texts for exams instead of performing them, it would have been very different, more reverential. Instead we had to break them down, look for a way into them. It does give you a very different attitude to language.”

I mention the British experimentalist BS Johnson (1933-1973), who was tragically years ahead of his time, but she shakes her head. She smiles on being asked has she read much Faulkner – “No, but he’s on my list” – and mentions that she had not read Ulysses until she was about 25. “My reading is far more random. I had read Beckett’s plays as a teenager, Edna O’Brien . . . and had also discovered the Russians, and became obsessed with Dostoyevsky.”

While still at drama school she had met her husband, theatre director William Galinsky, with whom she has a two-year-old

daughter. “He was teaching a directing course; he’s about five years older than me.” Before they settled down together, McBride temped for a while, “filing and answering phones”, and then set off, alone, to Russia. “I was always interested in Russia – the literature, the culture, the atheism – and had gone to night classes for about a year, trying to learn Russian.”

Galinsky had studied Russian and Czech at Oxford. She recalls her four months in St Petersburg. “It was great, but also very lonely, intense. I rented a room from an old couple and I went to the theatre, ballet, concerts. And I thought about writing. I had already begun to write, just not this book, though.”

On her return she returned to temping – “back to my filing cabinets”, she laughs. By then she and Galinsky were married and his work took them to Japan. The move was to prove crucial. “We used his fee to buy me time to write. I spent six months writing the book. I worked at it every day, all day, every day.”

She seemed to know what she was doing. If the book is experimental in form, she was not experimenting. “It’s funny; it’s the last thing I wanted to write about. I mean God, sex, death, incest, guilt. I thought, this is the very book I don’t want to write, I’m Irish, but that was the one that came.” She seems slightly baffled, and she is not by nature bewildered, being impressively self-contained, almost stoic.

She resumed temping and the long wait began. By now, the story of how A Girl Is a Half-formed Thing came to be published by Galley Beggar, a new small press in Norwich where she and Galinsky and their child now live, is widely known. “It is only the second book it has published,” she says, agreeing that everything began to change for her once she won the Goldsmith prize.

“It’s funny, well it’s not funny, but what happened was that the book just sat there for what, nine years, nothing. And then, in January 2013, I went back to it and cut about 8,000 words from it and made a few changes. I was told it was dark and bleak but . . . ” – and she does not need to say anything, it is obvious. She stood by her book. “I was asked to change the ending” – she looks at me, and we both say – “but that is how it has to end.” The girl has a hard life, but she is not a victim. “No she is not; she makes her decisions, her choices. She does what she needs to do.”

It is a performance piece, a narrative to read aloud as the images shatter and explode. “It is a big story, a small plot.” She calmly gazes at the copy on the table, a small black book, a life.

There is a second novel. “I have finished the story but haven’t finished the writing. No one has seen it, I have not sold it. It’s not ready.” This time the publishing world will be doing the waiting, not her.

A Girl Is a Half-formed Thing is published by Faber