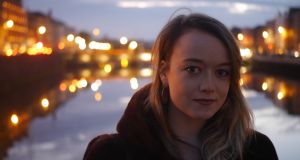 This Saturday’s Irish Times Eason book offer is The Hungry Road by Marita Conlon McKenna. When you buy the newspaper at any Eason store, you can also buy this bestselling Famine novel for just€4.99, a saving of €5.

In this Saturday’s Irish Times, Jane Harper talks to Declan Hughes about The Survivors, her latest crime novel. Reviews include Karen Lillington on The System by James Ball; Niamh Donnelly on Interior Chinatown by Charles Yu; Eilis Ní Dhuibhne on The Book About Getting Older by Lucy Pollock and Ageless by Andrew Steele; Mia Levitin on Bryan Washington’s Memorial; Robert Gerwarth on Stephan Malinowski’s Nazis and Nobles; Yvonne Cullen on Life Sentences by Billy O’Callaghan; Sarah Gilmartin on A Crooked Tree by Una Mannion; and Martina Evans on the best new poetry.

Irish writer Laura-Blaise McDowell has been shortlisted for this year’s Costa Short Story Award for The Lobster Waltz, the story of a young woman exploring LA. Also shortlisted are Louise Dean, who was previously longlisted for the Booker Prize, and screenwriter Tessa Sheridan. The prize is open to published and unpublished writers for a single, previously unpublished short story of up to 4,000 words by an author aged 18 years or over and written in English. The winner, announced on January 26th, is chosen by a public vote.

McDowell was shorltisted for the 2019 writing.ie Irish Short Story of the Year Award for Balloon Animals, which was first published in the anthology Still Worlds Turning ( No Alibis Press). You can read the stories and vote here.

The Seamus Heaney Centre at Queen’s University Belfast has appointed Louise Kennedy and Padraig Regan as the inaugural Ciaran Carson Writing and the City Fellows for 2020-21.

Kennedy was shortlisted for the Sunday Times Audible Short Story Award in both 2019 and 2020. Bloomsbury will publish her debut collection, The End of the World is a Cul de Sac, in April. She holds an MA in Creative Writing from the Seamus Heaney Centre, where she has just completed a PhD, the critical component of which was on the writer Norah Hoult (1898-1984); in 2019 she wrote the introduction to the New Island Books reissue of Hoult’s 1948 novel Farewell Happy Fields. Louise grew up in Holywood, Co Down and now lives in Sligo. She is working on a novel.

Kennedy said: “The five years I’ve spent as a student at the Seamus Heaney Centre have been crucial to my development as a writer and, as someone who left the north as a twelve-year-old, helped me find my way home. I am absolutely thrilled to be awarded this fellowship; that it is in memory of Ciaran Carson is truly humbling. I cannot wait to start.”

Regan is the author of two poetry pamphlets: Delicious (Lifeboat Press, 2016) and Who Seemed Alive & Altogether Real (Emma Press, 2017). In 2015, they were the recipient of an Eric Gregory Award. They hold a PhD on creative-critical and hybridised writing practices in medieval texts and the work of Anne Carson from the Seamus Heaney Centre at Queen’s. They are currently working towards their first full-length collection.

Regan said: “I’m absolutely thrilled to be one of the first Ciaran Carson Fellows at the Seamus Heaney Centre. I couldn’t adequately state the importance of Ciaran’s teaching and guidance on my development as an artist, so this is a real honour. I’m very much looking forward to working with the students at the Centre over the next year.”

Prof Glenn Patterson, director of the centre, said: “Ciaran Carson was not just a great poet and writer of extraordinary, and extraordinarily varied, prose, he was an example to all of us who live and write here of how to be truly international in outlook and absolutely true to this place. He was an inspirational figure for student poets and writers within the School of Arts, English and Languages at Queen’s, the Seamus Heaney Centre in particular, and it is fitting that the Fellowships created in his name should benefit students who have recently completed PhDs with us and are beginning to establish their own reputations as writers of originality and distinction.”

Submissions are now being invited for the Kerry Group Irish Novel of the Year Award 2021. This award is for the best novel by an Irish author published between 1st February 2020 and 1st February 2021 with a prize of €15,000 for the winning author. The adjudicators are Rachel Cusk and Richard Skinner.

Frank Hayes of sponsor Kerry Group said: “We are pleased to continue our sponsorship of the prestigious Kerry Group Irish Novel of the Year Award. Having celebrated 25 years of the Award in 2020, this much sought-after literary award continues to support Ireland’s proud literary heritage and international reputation.”

A shortlist of five novels will be announced in March and the winner will be presented with their prize at the opening ceremony of Listowel Writers’ Week Literary Festival on June 2nd.

The closing date for receipt of submissions to Listowel Writers’ Week is February 1st.

“Wit is the ability to say entirely the wrong thing in precisely the right way.”

This quip, worthy of Oscar Wilde himself, is in fact the winner of the Wilde Wit competition, run by The Oscar Wilde Society and The Oldie magazine. The society received more than 500 entries in its 2020 competition, with members voting to determine the winners. Participants came from around the world, and indeed the winners are from three different continents.

The winning entry came from Darcy Alexander Corstorphine in the UK, who clearly has a knack for the Wildean phrase, as he also won the first competition in 2019. Second place goes to Dr Ashley Robins in South Africa: “Good friends come and go, but one’s enemies remain forever faithful.”

Third place, an entry from Bill Stevens in Canada, was: “Retirement must be dangerous; no one seems to survive it.” Coincidentally, Stevens is Wilde’s third cousin, thrice removed.

All three winners received an autographed copy of Wildeana, the new collection of Oscar’s sayings selected by Matthew Sturgis, honorary patron of the Oscar Wilde Society and the author of Oscar: A Life. Gyles Brandreth, Stephen Fry and Eleanor Fitzsimons – all honorary patrons of the Oscar Wilde Society – recorded videos of the winning entries, which can be seen on the society’s YouTube channel.

Smyth has over 20 years of experience working in literature with children and young people. She started her career with Scottish Book Trust and went on to be Director of the Pushkin Prizes in Scotland and set up Blast-Off Books in Linlithgow, a specialist children’s bookshop befor eher eight years at the Edinburgh International Book Festival. Since 2020, she has been a programme consultant with Bath Festivals leading on the creation of the Reading is Magic digital children and schools book festival.

Smyth said: “It is a delight and privilege to be taking on the role of the Family & Children’s Events Programmer for the International Literature Festival Dublin, a festival with a brilliant reputation world-wide. Empowering young people to access and engage with books, stories and writing in all its forms is incredibly important: in our current climate this offers opportunities for understanding, connection and imagining better; and more now than ever we need enlightened and empathetic thinkers to shape our future. I am very excited to work with the ILFDublin team to celebrate the best of Irish writing and to bring exciting international authors to the city of Dublin.”

The relaunched Fortnight Magazine in September is to continue publication in both print and digital versions on a quarterly basis.

The January 2021 issue features contributions from Marcus Leroux, Katy Hayward and Feargal Cochrane on Brexit and from Claire Bailey, John Barry, Paddy Hillyard, Jordan Dunbar, Tom Arnold and James Orr on climate change. These articles are now available online at fortnight.magazine.org. Printed copies can now be secured by taking out an annual subscription or by ordering individual copies through No Alibis bookstore.

Maynooth University’s links with a small ethnic group from Ogoni, in the Niger Delta region of Nigeria, were further strengthened with the launch of a new book of essays and poems last month on International Human Rights Day. I am a Man of Peace: Writings inspired by the Maynooth University Ken Saro-Wiwa Collection, is edited by deputy university librarian Helen Fallon and published by Daraja Press.

The connection dates back to 2011, when Sister Majella McCarron donated the letters and poems Saro-Wiwa sent to her, while on death row. Saro-Wiwa, a writer and environmental activist was executed, with eight colleagues (The Ogoni 9) for leading peaceful protests against the activities of the international petrochemical industry in his homeland. McCarron met him while on mission in Nigeria and worked with him to highlight the situation at international level.

The new book contains 21 essays and 42 poems inspired by the ideals and activism of Saro-Wiwa, including pieces by his daughter, travel writer Noo Saro-Wiwa, and his brother, Dr Owens Wiwa.