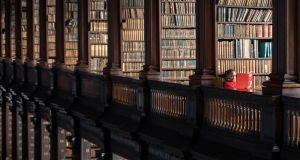 This is a remarkably ambitious project, taking the temperature of Irish literature from 1730 to the present in approximately 2,400 pages.

The seven editors – Moyra Haslett, Claire Connolly, Matthew Campbell, Marjorie Howes, Eve Patten, Eric Falci and Paige Reynolds – have selected their contributors from pioneers in the field (such as Andrew Carpenter, Ian Campbell Ross and Helen M Burke in the 18th century) through mid-career scholars (the majority, including the editors) to some exciting young contributors. I would question the use of “Irish literature” in the title, however, since all but six of the 120 chapters are on Irish writing in English.

1 Schools instructed to stop using Virapro branded hand sanitiser
2 Nine charged following clashes between gardaí, anti-lockdown protesters
3 Nphet now in control of the country’s economic and social policy
4 Father unaware partner and baby dead until gardaí called to raise alarm
5 My Irish passport has calmed tempers at borders and airports
6 Two hundred Irish retailers for all your online Christmas shopping
7 US election: Democrats target a major Senate upset in South Carolina
8 Life under Level 5: Where can I go, who can I see, what is closed and what is open?
9 Dublin residents seek removal of ‘distasteful’ cycle bollards
10 Large crowds gather on Dublin’s Grafton Street on eve of lockdown
11 Young people ‘sick of being told what not to do’, says WHO’s Mike Ryan
12 Reasons to believe Covid-19 pandemic will ease next spring, says health expert
13 Garda checkpoints turn motorists back, traffic volumes drop
14 Poots’ comments about Covid-19 would be funny if they were not so serious
15 Borat 2: Rudy Giuliani’s trouser-reaching scene is the work of a daring young woman
16 John Gilligan arrested along with two others in southern Spain
17 No doctor, no pharmacy, no supermarket: I’m moving to an island
18 Liam Neeson among new investors backing €100m Ireland Impact fund
19 Shock at golf clubs as sport faces shutdown in Level 5
20 Dáil approves transfer of mother-and-baby home records to Tusla
21 Developer’s impeccably restored Fitzwilliam Square Georgian for €3.5m
22 Body of woman and baby boy found in separate locations near Lucan
23 ‘You guys are amazing’: Matt Damon’s message of support to Temple Street children, families and staff
24 Warning that small shuttered shops may reopen in campaign of disobedience
25 Six further outbreaks of Covid-19 in nursing homes and community hospitals, Nphet says
26 HSE says it has stabilised staffing situation in nursing home hit by Covid-19 outbreak
27 Diarmaid Ferriter: We have been infantilised by Government’s latest move
28 International Dublin Literary Award: Anna Burns becomes first Irish woman to win €100,000 prize
29 Maxwell denied seeing Epstein involved in ‘inappropriate underage activities’
30 Waterford woman accused of sharing pictures of boys who murdered Ana Kriégel
31 Brexit trade deal is ‘doable but difficult’, says Coveney
32 Gillette ad: Why it's good for men and women that we're having this conversation
33 How on earth do we the calculate the cost of Level 5 for the Irish economy?
34 These lemon cheesecake bars are a little slice of sunshine
35 How long can Government afford to keep State pension age at 66?
36 Thousands of gardaí mount checkpoints and patrol parks, beauty spots
37 Boxing clever in Donnybrook for €825k
38 Bruce Springsteen: Letter to You review – Sublime meditations of loss, love, life and death
39 People who throw house parties can be fined €1,000 and jailed for up to a month under planned law
40 How smart shelves help retailers up the in-store experience for customers
Real news has value SUBSCRIBE