Irish food by the book: ‘Tickling the Palate’ – Gastronomy in Irish Literature and Culture

This collection will enlighten and delight readers 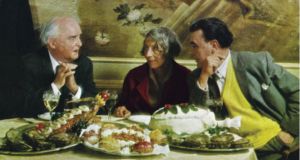 ‘Ireland, until recently, appeared as only the smallest of dots on the map of high gastronomy. Too many self-avowed connoisseurs were convinced that Irish food began and ended with bacon and cabbage, or the lack thereof.”

This collection of essays, the proceedings of the inaugural Dublin Gastronomy Symposium, held at Dublin Institute of Technology in June 2012, goes a long way towards correcting the view that there is no Irish cuisine worth its salt. It also dispels to some extent our postcolonial distaste for the fact that traditional Irish cookery over the past several hundred years has quite a lot in common with English cookery – it would be surprising if it did not, given the physical, cultural and political connections of the two countries. Indeed, once this truth, unpalatable as it may be, is digested, the Irish table of potatoes, cabbage and bacon (carrageen for dessert, if you can bear it) extends like an Ikea miracle, to become a cornucopia of quite nice grub: stuffed chicken, roast potatoes and apple pie, not to mention the full Irish breakfast. Or is that the Ulster fry, or full English breakfast?

The book includes 12 essays, plus an excellent introduction. Five of them deal with food as described in literary works by Maria Edgeworth, John McGahern, James Joyce, Sebastian Barry and several children’s writers; four deal with the history of food, especially restaurants, in Ireland, mainly Dublin; and three are about drink, mainly Guinness.

Eamon Maher, in a comprehensive survey of food references in McGahern’s novels, skilfully demonstrates how useful fiction is as a source for food historians, and how food imagery in turn offers the canny writer delicious prose, cooked and ready to dish up, as in this wonderful passage from Amongst Women: “The huge browned turkey was placed in the centre of the table. The golden stuffing was spooned from its breast, white dry breadcrumbs spiced with onion and parsley and pepper. There were small roast potatoes and peas and afterwards the moist brandy-soaked plum pudding. Brown lemonade was squirted into the glasses from siphons with silver tops.”

Few understand the power of food in prose better than those who write for children, as Michael Flanagan indicates in his engaging, sometimes provocative, piece. He deals largely with food references in books by Enid Blyton, Kenneth Grahame and even Charles Dickens, and one might wonder why the article is included in a volume about Irish literature. But we have read the books even if we didn’t eat the potted shrimp – and this essay, possibly unconsciously, highlights how close Irish and English cultures can be where both food and literature are concerned.

Dorothy Cashman’s excellent essay on Edgeworth’s culinary world also proves how valuable fiction can be in documenting gastronomic history. Cashman makes the point that “by the time Maria Edgeworth was writing, a parallel Anglo-Irish cuisine co-existed with what could be termed a native Irish diet”. (I suggest that the two diets had coexisted, or had been blending together, since the Middle Ages.)

Cashman points out that most countries have both elite and peasant diets, and Edgeworth, like the ladies who produced the charming manuscript recipe books to be found in the National Library of Ireland, represents the posh end of the table. Sweet Irish plums, a lemon cream and salmon “pickled the Sligo way” are among the delectable foodstuffs enjoyed by Edgeworth’s characters. The recipe for the lemon cream is included but, sadly, not that for the Sligo salmon. Cooks would like to know what exactly it was Sligo folk did to the salmon that made it so desirable.

Máirtín Mac Con Iomaire and Eamon Maher regret, in their introduction, that documentation of the food of ordinary Irish people in the 19th century is less readily available than accounts of the diets of the rich. Is this true? An invaluable source for information about foodways – which is to say a people or a period’s eating habits and culinary practices – among Irish country people in the early 20th and late 19th centuries, and by extension much earlier, is available in the National Folklore Collection at University College Dublin. Indeed much of this material has been analysed and published by, among others, Prof Patricia Lysaght, an acclaimed expert on Irish foodways, milk products in particular. Although one of the folklore scholars who investigated Irish peasant food, Kevin Danaher, is mentioned in this volume, its failure to refer even once to the folklore collections is a curious omission.

This quibble aside, this volume is a very welcome contribution to the study of Irish foodways. The articles on the great Dublin restaurants Jammet’s and that at the Russell Hotel, the wonderful insight into how poor Dublin housewives managed to put food on the table at all in the benighted 1950s, the contemplations on the new Ireland as a foodie nation, and Brian Murphy’s thoughtful examination of the phenomenon of the Irish pub abroad, as well as all the other essays in the volume, will enlighten and delight readers. The writers and editors are to be congratulated on their original research and new insights into a topic that interests everyone: food.

Patrick Stewart returns to Starfleet: ‘It’s inconceivable to me that I should retire’
Real news has value SUBSCRIBE