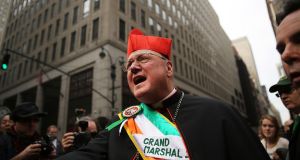 In 2002, at the height of the clerical abuse scandal, Michael McDowell, then minister of justice, said canon law had no more legal status than the rules of a golf club. To develop an analogy, even historians of religion sometimes find ecclesiastical history akin to being cornered by the club bore.

Its preeminent concerns are bishops and bureaucracies, not belief and believers; it is about the administration of the club, how different factions got their men on to the officer board, their improvement of facilities – but seldom about the game itself. Women barely feature and scandals are not laid bare. Too often, the club appears in splendid isolation from society and there is little serious reflection on its institutional culture.

1 Normal People: Full-frontal nudity was not its most radical feature
2 In six months we will be in the grip of a 1980s-style recession
3 Tyrone midwife on the cover of Vogue magazine
4 Angela Merkel sweeps in to save the euro zone
5 President expresses ‘greatest heartbreak’ at clashes with protesters in US
6 Barack Obama urges those protesting in US to seize the momentum
7 Brother is dragging his heels as executor of uncle’s will - is there anything I can do?
8 Luke ‘Ming’ Flanagan bares his bottom half to European Parliament
9 William James: in praise of the Irish goodbye
10 Pete Taylor takes personal injury case over Bray gym shooting
11 Making dinner is the new getting dressed. Just ask Selena Gomez and Gigi Hadid
12 Covid-19: Further easing of restrictions likely but little change to roadmap
13 With Lincoln looking on, the crowd dropped to their knees as 7pm approached
14 Stocktake: Has Warren Buffett lost the magic touch?
15 Covid-19: Varadkar downplays expectation of accelerated lifting of restrictions
16 Independents offered Jackie Healy-Rae style deal to support new coalition
17 From a New York Irish neighbourhood to chief of the NYPD
18 Normal People: The origins of Connell and Marianne
19 Newton Emerson: Brussels playing games with Irish sea border
20 Church of England rules Irish inscription on grave stone must have translation
21 Coronavirus: A further 123 cases reported in meat processing plants over past week
22 Mother of three (41) who had to fundraise for her own cancer treatment has died
23 Gardaí move against cyber crime, prostitution gang in Dublin
24 Over 50 healthcare workers repatriated from India to Ireland
25 A US nakedly at odds with itself is in no position to take on China
26 Chartered Land moves closer to approval for Dublin’s tallest tower
27 Body trouble: How to keep actors safe while filming sex scenes
28 Michael McDowell: Black Americans fear the future and so should we
29 What will reopened childcare centres look like to staff and to children?
30 Remote working: Ending the lunacy of pointless commutes
31 ‘Tralee felt friendlier than Killarney. We discovered a different welcome there’
32 ‘I saw young girls get kicked, hit, sprayed and dragged off gasping for air’
33 Minister wins appeal over ruling in favour of EU citizen’s partner to remain here
34 Little evidence of a ‘guiding hand’ behind US protests
35 Will Lafayette Park spell the end of Trump?
36 Donohoe warns of cost of pandemic as budget deficit swells to €6.1 billion in May
37 Why is there a criminal investigation into the Black Lives Matter Dublin protest?
38 Netflix: 10 of the best new shows and films to watch in June
39 ‘Did I miss anything?’ A modern Rip Van Winkle emerges, blinking, into lockdown
40 Should my mam wait for house prices to drop before buying?
Real news has value SUBSCRIBE