Ireland: A Voice Among the Nations: a lavish photographic history of Irish foreign policy 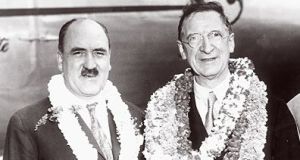 Exactly 100 years ago, the British prime minister David Lloyd George asserted in the House of Commons in relation to the demand for an Irish republic that “any attempt at secession will be fought, with the same determination, with the same resources, with the same resolve, as the northern states of America put into the fight against the southern states. It is important that this should be known not merely throughout the world, but in Ireland itself.”

As he spoke the leader of the Irish republican movement, Éamon de Valera, was in that same America, attempting to drum up political support and funds for the declared Irish republic. What both men knew was that theirs was a propaganda battle as well as a political and military challenge and making their respective cases to the wider world was essential.

9 The Path Ahead: Full facts from Nphet paint stark picture

11 Hotel isolation for 20 states excludes US, UK where cases ‘rampant’

15 Lack of trust causing women to put their lives at risk, CervicalCheck warns

24 ‘The type of pornography that my partner watches upsets me’

26 Enda McDonagh obituary: A theologian scholar with a towering intellect

28 Clonfin ambush can teach us about ethical remembering

30 Michael Harding: I wear a tie to Zoom meetings. It helps me play a role – myself

31 Gordon D’Arcy: No Irish player has inspired in the Six Nations like Seán O’Brien used to

33 Róisín Ingle: ‘Simon Harris is going live,’ my phone says, and I can’t stop myself

36 Vicky Phelan: ‘I was just sitting in the back of the car bawling’

37 How vaccine laggard CureVac hopes to come out on top