In praise of Mary Anne Sadlier, a literary figurehead of Catholic North America

Celebrating Irish women writers: ‘she gave voice to the preoccupations of a large section of the Irish-American community’ 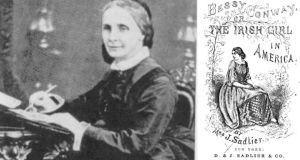 As a writer Mary Anne Sadlier was emphatically didactic. Her work provides examples of good conduct for Catholic Irish emigrants, to compel them to “retain their home-virtues and follow the teachings of religion in these great Babylons of the west”, as she wrote in a programmatic preface to Bessy Conway; or, The Irish Girl in America (1861)

In view of the unabashedly didactic purpose of her works and her fervently conservative Catholic morality, it is perhaps not surprising that the nineteenth-century emigrant writer and publisher Mary Anne Sadlier is no longer read. Yet for several decades she was one of the foremost voices of a generation of emigrants who had left Ireland because of the Great Famine.

Sadlier was born Mary Anne Madden in Cootehill, Co Cavan, on December 30th, 1820. Her mother died when she was still young. Despite her abiding interest in the Great Famine and the wave of emigration it catalysed, Sadlier was not a Famine emigrant herself. She left for Canada following the death of her impecunious merchant father in 1844, a year before the crisis in Ireland started.

In Canada, she married Catholic publisher James Sadlier, a partner of the influential Catholic publishing house D and J Sadlier & Co. The Sadliers settled in Montreal, where Mary Anne gave birth to six children while also working full-time as an author.

As a result of her marriage, Sadlier was well-placed to become a literary figurehead of Catholic North America. Her circle of acquaintances in Canada and the US included Young Irelander turned Canadian statesman Thomas D’Arcy McGee, whose collected poems she edited after his death; Archbishop John Hughes; and the influential Catholic activist Orestes Brownson.

Sadlier’s literary career began when she was 18, with the publication of a number of poems in a London magazine. In Montreal, she wrote for a number of periodicals, including the Literary Garland and Catholic newspapers such as the Boston Pilot, the New York Freeman’s Journal, and the American Celt, which was edited by McGee. Most of her novels were serialised in the New York Tablet – a D&J Sadlier concern – before they were published as books.

In 1860, the Sadliers left Montreal for New York. Here, Sadlier continued her prolific writing career and hosted a weekly literary salon whose visitors included Brownson and Hughes. Between 1850 and 1870, before her productivity tapered off, she published no fewer than 19 novels, in addition to numerous editions and translations. After the death of her husband in 1869, Sadlier took control of the publishing house, even running it singlehandedly after her brother-in-law Denis Sadlier passed away in 1885.

Towards the end of her life, Sadlier had to return to writing to keep her head above water, after she had to cede control of the business to her nephew and lost the copyright to her earlier works. She died in 1903 at the age of 82.

With her romantic works about Ireland and Irish emigration, Sadlier catered to a large audience of nostalgic Irish immigrants who tried to find their bearings in their new home country. As a writer Sadlier was emphatically didactic. Her work provides examples of good conduct for Catholic Irish emigrants, to compel them to “retain their home-virtues and follow the teachings of religion in these great Babylons of the west”, as she wrote in a programmatic preface to Bessy Conway; or, The Irish Girl in America (1861).

This novel, which went through eight editions before the century was out, focuses on the adventures of a young Irish woman who sails out on an emigrant ship to work as a domestic servant in New York. It hammers home the lesson that the Irish in America should stick together in closely-knit communities. Sadlier fears that the Irish in the New World will neglect their religious duties and lose their Catholic faith when exposed to temptations such as dances and alcohol, or when they work for irreligious or Protestant families. The Irish emigrant girls that Bessy encounters in her employers’ households refuse to go to Mass and are pressured into converting by their mistresses, who command them to join their families in prayer.

Bessy is presented as a model for emulation, standing up to her Protestant employer Mrs Hibbard, and remains steadfast in her Catholic faith. As she tells Mrs Hibbard, “You know we’re all Catholics, ma’am, and we can’t join in your prayers”. Eventually, she is rewarded for her piety, finding a well-paid position in the Catholic home of Mrs Walters. After seven years in America, she returns to Ireland at the height of the Famine, and rescues her family from destitution with her savings.

Other good characters, such as Paul Branigan, also thrive. Branigan stays in close contact with his former fellow passengers and establishes a little “Sunday School class in St James’ Church” to educate the children of Irish immigrants on Catholic dogma. He also becomes a successful small businessman. Promoting ethnic cohesion and cultural separatism in the diaspora, Bessy Conway sheds an interesting light on the ways in which Irish emigrants of the Famine generation formed new identities on American soil.

Sadlier would also address the theme of Irish community building in several other novels such as the immensely popular The Blakes and Flanagans (1855), which went through five American as well as two German editions and was also published in Ireland; Con O’Regan: or, Emigrant Life in the New World (1864); and Elinor Preston: or, Scenes at Home and Abroad (1861).

Elinor Preston, a novel with some autobiographical features, addresses the isolation of Irish emigrants to America and Canada, showing how the female protagonist feels out of place even in the predominantly Catholic city of Montreal. The story also depicts the dire fate of many Irish emigrants, many of whom succumbed to fever or lost relatives during the transatlantic passage on so-called coffin ships.

Looking out of the window in her lodgings in Montreal, Elinor witnesses the funeral procession, almost unattended, of some of these victims. These cortèges are described as “pictures of such utter loneliness … mournful fragments of what has been called the Irish Exodus”.

Elinor’s heart goes out to the “ bereaved husband or wife, or the orphan children left friendless and alone on a foreign shore”. Her sympathy is partly inspired by the losses that she herself suffered in Famine-stricken Ireland, as her family went bankrupt and many relatives passed away.

Even though Sadlier had not been a witness to Famine horrors herself, they were a theme that she addressed numerous times, most importantly in New Lights: or Life in Galway (1853). This novel, set in Famine Ireland, focuses on the tensions between the heartless landlord Ousely and his Catholic tenantry. Ousely advocates the proselytisation of his Catholic tenants and evicts the exemplary O’Daly family because they refuse to barter their faith for bread.

As one of the earliest Famine novels, which prefigured numerous later fictional representations of the crisis, New Lights represents Catholicism as a beacon of strength and as an expression of imperial defiance in times of starvation. The O’Dalys “are of the ould stock, or the ould rock … an’ they can die for their faith, as they have lived in it, them an’ their fathers before them”. The remains of sites of Catholic worship that are scattered through the landscape suggest that Ireland’s rural population will eventually survive the blows of the Famine years – a hopeful message for emigrants who had lived through the tragedy.

Writing some of the earliest literary accounts of the Famine, Sadlier played a crucial role in disseminating its legacies, to Ireland but especially to the North-American diaspora. With her works – some of which have been digitised on archive.org – she gave voice to the preoccupations of a large section of the Irish-American community, and for this she deserves to be read.