In praise of Biddy Jenkinson, by Caitlín Nic Íomhair

The Irish language poet is famously private, but her work is anything but witholding, full of love and laughter, amazement and hope 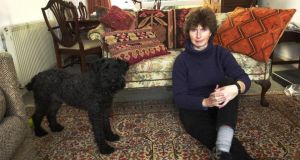 Using a pen-name and reluctant to be interviewed, Biddy Jenkinson’s secrecy once prompted speculation that a committee wrote her poems. Photograph: Cyril Byrne/The Irish Times

Who IS Biddy Jenkinson? For over 30 years now, scholars have been left stumped and scratching their heads as this very private poet has risen to the top in an era of extraordinary Irish language writing. Famously hard to pin down, the best I can do is this: think Angela Carter meets Mary Midgley, with a bit of Maeve, Queen of Connaught thrown in for good measure. Charged by an unlikely combination of the cerebral and burlesque, her poetry packs in belly laughs, its dizzyingly broad frame of reference spanning everything from Cú Chulainn to fossilised faeces.

Regrettably, the sheer vivacity of Jenkinson’s poetry is often overlooked, with undue emphasis instead placed on her decision not to be translated into English. Much to every Gaeilgeoir’s bemusement, her stance is often couched in terms of self-sacrifice, as if this most aloof and irreverent of poets secretly yearns for a spotlight in the mainstream but is held back by some oppressive loyalty to her choice of language.

Not so: filled with love and laughter, amazement and hope, Jenkinson’s poetry is anything but withholding. It is extravagant in grief and exults in bawdiness. Sex, for once, is hilarious and bizarre, with the poet jealously marvelling at gastropods who don’t have to stop canoodling for a post-coital pee. The body is revelled in, marvelled at, and occasionally dismembered without a hint of sentimentality.

Though she has written movingly on war and our other collective failures, Jenkinson is no preacher-poet. Moral conclusions are only ever offered tentatively - always waiting, one suspects, to be contradicted. At times she may seem coy in contrast to more politically forthright poets like Nuala Ní Dhomhnaill, but fondness for paradox is a key feature of Jenkinson’s writing.

Integrity means something different to us all. Biddy’s excellent essays explain that for her, it is a principled commitment never to climb upon a soapbox or a hobby horse. She has her own, equally perilous vessel to master: “láir bhán na filíochta”, the white mare of poetry.

The poet’s religious toing and froing will have every reluctant agnostic nodding their head in sad recognition. Happily, one of her best poems on the subject, ‘Eve In Her Garden In This Vale of Tears’, is also one of the few to be translated into English. Like the best of the undecided, Biddy celebrates this life passionately and with brutal honesty about its darkness, echoing Camus’ commitment to live more, not better.

Using a pen-name and reluctant to be interviewed, Jenkinson’s secrecy once prompted speculation that a committee wrote her poems. Her cover remains only partly blown (due, incidentally, to a scoop in this newspaper). The one thing her readers know for sure is that this is a woman of almost infuriating intelligence who has given us some of the best poems written on this island in a long, long time.

There is hardly a genre that Jenkinson hasn’t tried, and her range is broad enough that there is something in it to please everyone, from modern mythology to slapstick short stories and forays into crime and detective fiction. Her wonderful children’s book, An Bhanríon Bess agus Gusaí Gaimbín, deserves special mention for its heart and accessibility, while readers with only faltering Irish can turn to her English essays and the handful of translations.

She is a jester, a shapeshifter and a polymath. Thrillingly, she may also be that seemingly unremarkable woman sitting next to you on the bus. Dust off your foclóir and give her a whirl - the morning commute may never be the same again.

Caitlín Nic Íomhair is a writer and PhD student in Trinity College’s School of Irish.