Mary Shine had a pleasant surprise when she opened The Irish Times last Saturday. Our poster brought back happy memories of her own project, which she is delighted to share 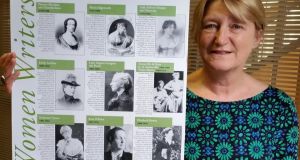 Nothing new under the sun: Mary Shine with her Irish Women Writers, which she produced with her friend Vincent Kinane in 1999. “I particularly remember, at that time, being very annoyed that no matter what bookshop or even coffee shop with a literary flavour I went into, all the posters, postcards and trappings about writers were of the same list of males.”

I was pleasantly astounded to open my Irish Times review section last Saturday, while sitting in my local hairdresser’s here in Sligo, for before me was a two-page spread of a fantastic selection of women writers. We don’t often get a 100 per cent look in! So I want to congratulate you and all involved including The Irish Times paper itself.

I do want to let you know that back in 1999 I, along with a good friend of mine, Vincent Kinane, decided to produce just such a poster, to highlight the fact that there were many excellent women writers here in Ireland, and there was a tradition of such writing going back centuries. Sadly, through being marginalised from the mainstream, it appeared both in the educational system and across the culture that the only good writing ever done in Ireland had been done by men. I particularly remember, at that time, being very annoyed that no matter what bookshop or even coffee shop with a literary flavour I went into, all the posters, postcards and trappings about writers were of the same list of males. 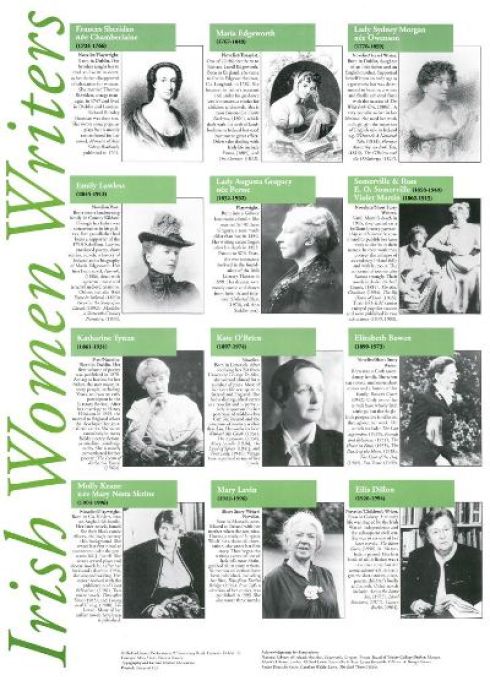 Even while at school I recall only one Irish woman appearing on the syllabus – Mary Lavin. In poetry there was no Irish woman included and Emily Dickinson was the only woman we studied. That certainly stayed with me. After school I discovered Virago and began my literary education on the other 50 per cent of writing humanity but had little knowledge about Irish women writers. It was only when I decided to do a masters in Women’s Studies that I began my introduction to some of these writers.

I had previously discovered some of our great poets such as Eavan Boland, Paula Meehan, Eilean Ní Chuilleanain, Medbh McGuckian, Nuala Ní Dhomhnaill, Maire Mhac An tSaoi, Kerrie Hardie, Mary O’Malley, Anne Hartigan, Moya Cannon and a host of others, when I began writing some poems myself. The fact was that I had educated myself about this great tradition of writing women but nowhere was it represented sufficiently in Irish society, despite occasional reviews in such newspapers as yours and in some literary magazines.

My friend Vincent was in hospital at the time (February1999) and while visiting him I began on this subject yet again and with some irritation on his part, he threw at me – “If you are so bothered about it why don’t you do something about it?” and I said “Like what?” “Produce a poster of Irish women writers!”

But of course I didn’t feel at all competent to do any such thing – never mind that I had only a fairly superficial knowledge of these writers and had no experience at all of how to go about producing a poster. And where was the money to come from? At that point I was poor and unemployed. He said he would supply the finances and then I got a little excited about the idea, but knowing also that he was a librarian and had some experience of the technical aspects of such an undertaking, I insisted that it could only be done if he came on board as well. There was also a time element which was just as well as it put a time frame on the project – there was a conference coming up on Irish women writers at the end of May.

Though out of my depth I decided it was worth a try and over the next few months we set about our task. I was to find a list of women and we would decide together which to include. I was advised to leave out living writers as copyright was more complicated and there wouldn’t be enough time. I also had to write a short summary about each of our chosen women. We took account of chronology to give the sense of a tradition in women’s writing and also chose across a few genres. Vincent went about getting someone to produce the poster and also writing to various bodies and people to acquire permission and get suitable photos of our writers.

It was so exciting to get these pictures and do a mock-up of the finished project and best of all to have it ready for that conference. It just felt like the right time. And I had done something I had never expected to do. That it never went beyond that first burst of effort is my own doing. We managed to get posters into some libraries and bookshops but I was not really a businesswoman and didn’t push the posters out into the world as I should have. I have felt bad about it at times over the years. Vincent died at the end of 2000 and that put another dent in the prospect of getting more attention for it. And then I moved to Sligo and put the whole thing behind me.

However, seeing your poster got me thinking about it again and wanting to tell my tale about our poster. I included seven of the same women – Maria Edgeworth, Somerville & Ross, Lady Gregory, Molly Keane, Elizabeth Bowen, Kate O Brien and Mary Lavin. It is wonderful to see some living writers on your list. My other choices were Frances Sheridan, Lady Morgan, Emily Lawless, Katherine Tynan and Eilis Dillon. We used the same colour green but used it more for the background.

Thank you for bringing it all back to me and also for this wonderful production of the women writers of Ireland. It is certainly not before time to have such a welcome poster produced by a mainstream newspaper such as The Irish Times.