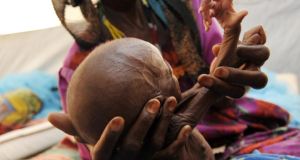 The number of hungry people is again rising while the world produces enough food to feed itself one-and-a-half times over. Photograph: Sia Kambou/AFP via Getty Images

Three women gathered around a hospital cot – a grandmother, a mother, and an aunt. The aunt leans over it and raises a baby boy. She holds him up in the air, looks at him with a strange expression on her face, as if puzzled, and then places him on his mother’s back – his chest pressed against it, his arms and legs spread. And then the mother ties him on with another cloth. And the child stays in place, ready to return home – dead.

This incident, which opens Martín Caparrós’s Hunger, occurred “a few years ago” in Niger. And both the mother, her name was Kadi, and the hunger that stole her child are familiar to historians of Ireland. They are familiar because Caparrós traces hunger in contemporary Niger, at least in part, to historical “plunder”, the crippling distortions of colonialism. And because mothers bearing dead children on their backs were in the years of Ireland’s Great Famine frequently described, often in great detail, in newspapers and the correspondence of those trying to secure relief for the hungry – so often, in fact, that a woman bearing her lost offspring became almost a type, her appearance in a locality an indicator of how bad things had become.

1 Restarting Ireland: When and how will we ‘get back to normal’?
2 Tuberculosis vaccine ‘potential game-changer’ in Covid-19 fight
3 Coronavirus: Another 17 deaths and 331 new cases reported
4 Mary Lou McDonald: This crisis shows that Sinn Féin was right
5 What is Houseparty, the app everyone’s talking about – and not in a good way?
6 Dublin deserted: Coronavirus turns city into ghost town
7 Search for two missing members of Kennedy family treated as ‘recovery mission’
8 Coronavirus lockdown steps could remain into winter, says expert
9 International Space Station returns to Irish skies on Friday and Saturday
10 Three arrested after man shot dead in ‘brutal’ Belfast killing
11 Lockdown living: ‘We’ve moved into a cabin so the kids can have the house’
12 Stephen Kenny replaces Mick McCarthy as Ireland manager
13 Belfast phone mast hit by arson after claims over 5G link to coronavirus
14 Coronavirus: Carrie Symonds is recovering from symptoms
15 Covid-19: Cocooning elderly over 70 at risk of vitamin D deficiency
16 Coronavirus: Analysis shows median age of confirmed cases is 48 years
17 Irish woman in Sweden: No lockdown, little distancing, people still shaking hands
18 Fintan O’Toole: Earth has a toxic virus – us
19 Coronavirus: Situation in Ireland ‘misrepresented’ because of limited testing
20 David McWilliams: We must loosen up on financing pandemic spending now
21 We need to cancel the Leaving Cert and give students predicted grades
22 Three held after South Armagh gang steals ATMs in Dundalk
23 Meet the couple who dashed to get married just before the lockdown
24 Lewis Capaldi: ‘I’m not Justin Bieber or Ed Sheeran – I’m not getting chased down the street’
25 Pat Leahy: Small parties seem intent on fleeing from government
26 Doing the coronavirus rounds with Joe the postman in Dublin 3
27 Netflix has revealed its most-watched content. You might be surprised
28 Coronavirus: What are the new nursing home measures?
29 The air is filled with birdsong now. It was always there, we just couldn't hear it
30 ‘We’re fine up here, Ross. I just can’t imagine this thing coming to Foxrock’
31 Government to source alternative protective equipment, says Donohoe
32 Coronavirus Q&A: How to shop safely during Covid-19
33 The best little-known board games to keep all ages entertained
34 Paul Flynn: how to cook the perfect potato rosti
35 Goodbye leprechaun economics, hello another grim milestone
36 Coronavirus Q&A: Should we all be wearing face masks?
37 Seán Moncrieff: I’m sick of hearing this is the new normal
38 Coronavirus is ‘no excuse’ for refusing separated parents access to children
39 Pope Francis: An icon of hope and solidarity in a time of crisis
40 The Irish Times view on the pandemic: people expect to be levelled with
Real news has value SUBSCRIBE