How Much of These Hills Is Gold: A haunting debut 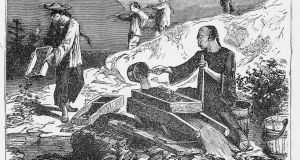 Chinese American men panning for gold in a California riverbed.

The title of C Pam Zhang’s debut novel evokes a folksy old expression, which originally comes from Mark Twain’s 1892 novel The American Claimant. But it also explicitly alludes to the Chinese experience of gold prospecting in 19th-century America. The most common Chinese name for San Francisco, Jiujinshan, means “old gold mountain”, maintaining a historical echo of the California gold rush in a city still home to one of North America’s largest Chinese populations.

How Much of These Hills Is Gold takes place across several decades either side of the rush, and tells the tale of two young daughters of Chinese migrants left to fend for themselves after their father, worn down by liquor and life in the mines, drops dead, three years after their mother has expired in childbirth.

1 Transgender Cork farmer (65) surprised at positive response to telling her story
2 Bobby Storey: The IRA's planner and enforcer who stayed in the shadows
3 Storey funeral a reminder that IRA army council runs Sinn Féin
4 Q&A: How close are we to having a Covid-19 vaccine?
5 Patrick Freyne: You endearingly sentimental sociopath, I’ve just the show for you!
6 Shared parenting: fathers being forced to go down ‘adversarial route’
7 How I learned to ignore the ‘straight bully’ in my head and become a ‘bad lesbian’
8 Covid-19: Mother and daughters moved into nursing home to tend to elderly residents
9 Cork residents begin legal action against landlord over ‘lockdown parties’
10 If hairdressers ran our schools every child would be going back in September
11 ‘Feeling that rejection in society, it’s horrible,’ says first Traveller woman in Oireachtas
12 The abrupt end to Brexit talks is not only surprising but perplexing
13 World View: Ireland weaponised by London in Brexit talks
14 Pubs could lose licence if they flout Covid-19 rules, warns Garda
15 Unflappable ‘Dr Tony’ became public face of Covid-19 crisis response
16 Netflix: 10 of the best new shows and films to watch in July
17 EU hacking operation ‘like having an inside person in every top organised crime group’
18 Trophy Curragh stud farm with exceptional pedigree for €4m
19 Dara Murphy leaves EU job after just seven months
20 Is Donald Trump losing his touch?
21 Mixed reaction to Dublin streets closure in bid to boost business
22 Monica Seles: The warrior queen who could have been the best ever
23 John Cleese has a faulty sense of humour about the Irish
24 Weather warning issued for parts of the country for this weekend
25 ‘Ten of the best books set in Ireland’: Does the Guardian get it right?
26 US democracy is heading towards the mother of all stress tests
27 Netflix has revealed its most-watched content. You might be surprised
28 Five things to know about Ireland’s new political landscape
29 If you are young and live outside Dublin you could be in trouble
30 Stocktake: Playing poker with the day traders
31 Hundreds enjoy North’s first drive-in country music concert
32 Ireland’s official coronavirus death toll likely to have been overstated, report finds
33 Dog gone. Brazil president’s mascot has 15 minutes of fame
34 Ireland faces 'deep downturn' this year and may not rebound until 2024 if there is a second wave
35 David McCullagh announced as co-host of RTÉ Six One News
36 Four new films to stream this weekend
37 Spanish councillor offers to resign after showering during video meeting
38 Breda O’Brien: How many other Baby Christophers are there?
39 Tony Holohan stepping back from role as chief medical officer
40 Ah, will you not dump on your new Taoiseach for us? It’s the least you could do
Real news has value SUBSCRIBE