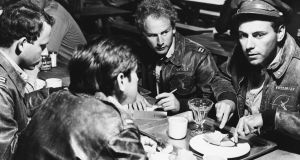 Understandably enough, the five novels that dominated the New York Times bestseller list of 1948 (the year the last American GIs finally returned home from Europe and Japan) were all war novels. What is perhaps more remarkable is the fact that they were all written by Jews or had Jewish soldiers as central protagonists: Norman Mailer’s The Naked and the Dead, Irwin Shaw’s The Young Lions, Ira Wolfert’s An Act of Love, Merle Miller’s That Winter and Stefan Heym’s The Crusaders. A sixth book about a Jewish soldier also very sold well that year, Martha Gellhorn’s Point of No Return.

The critical and popular dominance of Jewish-authored war novels in America extended throughout the 1950s and into the early 1960s. For instance, Herman Wouk’s The Caine Mutiny (1952) was the biggest American bestseller since Gone with the Wind, while Joseph Heller’s Catch-22 (1961) went on to sell 10 million copies worldwide. In much the same way that in Hollywood Jewish studio heads and directors helped shape how mainstream Americans understood cultural touchstones such as Christmas, bestselling Jewish American war novels profoundly influenced how the American public came to understand the second World War.

More than 500,000 Jewish men – nearly half of the Jewish American male population between the ages of 18 and 40 – served in the second World War.

By entering the armed forces, Jews had to face not only the anti-Semitism of fellow soldiers, but also overcome the legacy of being viewed as “weaklings” too cowardly/effeminate/fearful to be effective warriors. In these bestselling Jewish war novels, Jews for the first time became the popular literary representatives of what it meant to be a soldier and what it meant to be an American.

Even more importantly Jewish war novels changed the manner in which Americans understood what soldiers, sailors and airmen were actually like. Before the novels of 1948, the ideal America soldier was the Hemingwayesque hero: stoic, tough, laconic.

In the Jewish war novels we instead have protagonists who struggle constantly with their own troubling thoughts about death, who are intellectual and emotional, who spend their evenings drinking and womanising, but also reading poetry and writing cynical letters home. Rather than avoiding descriptions of the soldier’s internal battles with cowardice and ambivalence, these novels give voice to them, offering a general readership access to the dark emotions and angst felt by those in war.

Unlike the war stories of Hemingway, Stephen Crane or EE Cummings many of these novels are also very funny, which may have been why they were so popular. By 1961, with Joseph Heller’s Catch-22, this type of lippy, sensitive hero becomes a stand-in for all male rebels against the system, paving the way for the counter cultural icons of the 1960s such as Jack Nicholson in Easy Rider. By the 1970s the rewriting of the soldier as sensitive, intelligent, funny and irreverent was in fact so mainstream that TV shows like M*A*S*H made this the default version of what it meant to be an American soldier.

This ambivalence about combat itself was personified by Norman Mailer, author of the bestselling novel, The Naked and The Dead. Although Harvard educated, Mailer chose to join up as an enlisted man rather than as an officer because he thought it would enable him to experience battle directly and – as he wrote to his wife Bea – therein “get the material to write a great American novel.” Yet, as I discovered in his archives, Mailer backed down when given the possibility of serving on the front line. As he later wrote to Bea, “I thought, you ass, Mailer, you’re playing around with your life here”.

By not directly experiencing any fighting, Mailer was in fact like the majority of men and women who served in the second World War, the clerks, dentists, base cooks, logistics officers, members of support staff, and so on. Behind the lines, Mailer interviewed the men just back from the front then used his imagination to create his version of the war, giving himself and his readers (most of whom, of course, had also not been there) a chance to enter the heroic, intense, world where men tested themselves and overcame their darkest fears.

Of course some Jewish writers were so traumatised by their front-line experiences that they never managed to write about them at all except in the most oblique ways – JD Salinger and Mel Brooks would be obvious examples here. And then there was the occasional oddball, like Leon Uris, who worshipped the Marine Corps, loved fighting and seemed to be happiest when in close combat.

Racism and anti-Semitism were also major themes of the Jewish war novels. These books were a direct challenge to the anti-Semitism and racism that had been prevalent before the war, most notably personified by the prominent radio broadcaster, Father Charles Coughlin.

What most of these authors tried to do was assert the idea that a basic American value was pluralism, and that all communities, including blacks, Jews, homosexuals and Mexicans, needed to be valued in postwar life. Jewish war novels shaped the understanding of postwar America about the events that had just happened in the conflict, along with suggesting how the country should treat Jews and others in the coming era. Moreover, apart from newsreels, these bestsellers were the first time Americans were confronted with explicit accounts of the Holocaust, as found, for instance in Martha Gellhorn’s underrated Point of No Return.

To sum up, what I try to show in my book is that although Jews were only 3.5 per cent of the US population, they ended up creating the template through which Americans saw the second World War; furthermore, the way American fictional soldiers are now portrayed is a direct result of the transformation that began with Norman Mailer’s The Naked And The Dead and was more or less completed by Catch-22.
Leah Garrett is a research Professor at Monash University. This article was based on her book Young Lions: How Jewish Authors Reinvented the American War Novel, a finalist for the National Jewish Book Award and winner of the 2017 Jordan Schnitzer Book Award