Hitler: Only the World Was Enough: its originality and intelligence command attention

Review: a thoroughly thought-provoking and stimulating biography which all historians of the Third Reich will have to take seriously 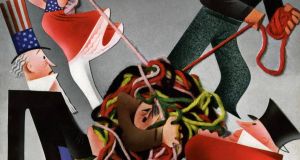 The Tangle in Europe: figures representing England, the US, Italy and France pulling on a ball of yarn with Hitler inside. Illustration: Garretto/Condé Nast via Getty Images

Hitler, more Hitler, ever more Hitler. No sooner has Peter Longerich’s huge biography of the dictator hit the book stores this summer, when along comes another following rapidly in its wake. Brendan Simms’s latest contribution will doubtless be compared with its immediate predecessor.

What distinguishes them both is a central idea that drives the narrative: for Longerich, the argument that Hitler dominated everything that happened in the Third Reich, no “weak dictator” he; for Simms, whose Hitler is also the key playmaker in the dictatorship, the conventional view that Hitler’s chief enemy was “Jewish-Bolshevism” is overturned in favour of the British Empire and the United States as the real target of his long-term strategy. The war against the Soviet Union was the means to an end: vast new resources of materials and manpower to be mobilised against the capitalist West in a final struggle to secure Germany its rightful place as a global power.

1 Harry and Meghan will no longer be working members of royal family
2 ‘He was some man’: Shane’s journey from care child to fearless activist
3 Chris Hadfield on the climate crisis: ‘The world has seen much, much worse’
4 Mary Lou has to call for the smelling salts as SF councillor deals a knock-out blow
5 Netflix: The best 101 films to watch right now
6 The cost of a Dublin cottage refurb: ‘We struggled with the mortgage lending rules’
7 Fine Gael deletes spoof election video after negative response
8 Paul Flynn: Three of my family’s favourite dinners
9 Here’s why Billie Eilish’s Bond theme commission has hit a sour note
10 Balearic Islands ban pub crawls and ‘balconing’
11 Dublin gangland figures involved in Drogheda feud that killed 17-year-old
12 Peter Casey on the campaign trail: ‘My ideal job would be minister for health’
13 Flooding in Australia as storms lash some bushfire-hit regions
14 David McWilliams: Introduce a congestion charge and make public transport free
15 Who was murdered teenager Keane Mulready-Woods?
16 Election 2020: Kerry constituency profile
17 Ross O’Carroll-Kelly: I hate my father-in-law the same way dogs hate lampposts
18 Leinster qualify as top seeds with Benetton win
19 St Michael’s conveyor belt showing no signs of slowing down
20 Terry Gilliam: ‘Adam Driver is either an idiot or the last pure-hearted person out there’
21 Murdered and mutilated: Keane Mulready-Woods and the teenagers of gangland
22 Varadkar says Greens need to show how ‘extreme’ carbon cuts can be done
23 Too many promises risks making voters nervous
24 ‘Satanic’ sect kills seven people in Panama
25 Ulster huff and puff their way past Bath and into the quarter-finals
26 The most exciting Irish restaurant, from a young team, in years
27 Could I go a whole year without buying any new clothes?
28 Election 2020: Dublin South-Central constituency profile
29 Election 2020: Donegal constituency profile
30 Boeing identifies new software flaw in grounded 737 Max
31 Patrick Freyne: The mystery of Dermot Bannon and his many surrogate wives
32 Two men injured in Co Clare shooting
33 Welcome to Iten in Kenya – home of champions and cheats
34 Haaland hits the ground running with hat-trick on debut
35 Election 2020: Wexford constituency profile
36 Gerry Thornley’s guide to the Champions Cup pool permutations
37 Fintan O’Toole: Ten big questions for incoming politicians
38 Murder inquiry after Cork student stabbed in neck at house party
39 Fine Gael proposes restrictions on tenants’ right to buy social housing
40 GoMo is being investigated by advertising authority
Real news has value SUBSCRIBE