Heavy: How Metal Changes the Way We See the World – The sublimely ridiculous 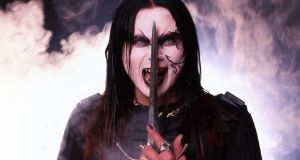 I recently went to a metal concert in Berlin with a distinguished English author. It was all billowing smoke, dark cloaks and clenched fists. Midway through he retreated to the bar, objecting to the music because it was ridiculous. I loved it because it was ridiculous. This indicates your likely response to Heavy, Dan Franklin’s paean to metal. If you’re happy to be swept along with Franklin’s take on songs such as Metallica’s Fight Fire with Fire (“It’s not so much with fear, but with relish, that [Hetfield] concludes each chorus: ‘We all shall die’ ”), you’ll have a ball.

Heavy, rather than presenting a history of metal, riffs on themes. The opening chapter, for example, covers the originators Black Sabbath, Led Zeppelin and Judas Priest; the next looks at metal as a response to nuclear war. Through this approach Franklin aims “to define what heavy music means to me, what it means to others, and how it binds other parts of culture to metal music”. Culturally nods are given to cinema, philosophy and the like in the casual, playful manner of a well-researched blog. Alongside this there’s not always a lot of critical analysis.

1 Tony Holohan stepping back from role as chief medical officer
2 Coronavirus: Rise in transmission in Ireland sparks concern
3 A ‘rock’ and a ‘patriot’: Tributes paid to Tony Holohan as he steps back
4 Several factors pushing Boris Johnson towards a Brexit deal with Brussels
5 Why are markets booming when a crash is on the way?
6 Bobby Storey: The IRA's planner and enforcer who stayed in the shadows
7 John Cleese has a faulty sense of humour about the Irish
8 ‘I felt something furry move under my hand. Man alive, I am terrified of rats’
9 All change at the unique Ashford Castle in era of Covid-19
10 Shared parenting: fathers being forced to go down ‘adversarial route’
11 Netflix: 10 of the best new shows and films to watch in July
12 Ghislaine Maxwell charged with helping Jeffrey Epstein abuse minors
13 Ireland has lowest current incidence of Covid-19 in western Europe
14 How much do Irish people earn? And what will Covid-19 do to our wages?
15 Pygmalion pub mired in weekend social distancing row
16 Irishwoman in Athens: ‘Being stuck in Greece isn’t exactly a hardship’
17 ‘Ten of the best books set in Ireland’: Does the Guardian get it right?
18 China threatens to retaliate for UK’s citizenship offer to Hong Kongers
19 World, look away now – these are dark days for the United States
20 Sinn Féin leaders reject criticism of O’Neill’s behaviour at top republican’s funeral
21 Cultural bodies should be ‘wary’ of funding from China, library says
22 Little consolation for dethroned Man City as they thrash Liverpool
23 These viral news clips make me thank God none of my parenting is televised
24 Drumcondra credit union collapses as merger plan fails
25 The Irish Times guide to new electric cars for 2020 and 2021
26 Leaving Cert calculated grades open to danger of gender bias
27 Storey funeral fallout: Executive safe for now but things could turn toxic
28 Homeless man found dead in Dublin city centre
29 Sunday Times Audible Short Story Award won by Irish author for two years running
30 Man arrested in Covid-19 payment fraud inquiry
31 Who are the new junior ministers? All their profiles are here
32 Ireland’s Covid dead: Bill Taylor was a Bohemians player and a man of learning
33 Readers on overseas travel: ‘I am responsible enough to go and manage the risk of Covid’
34 The Irish Times view on British politics: Brexit purge continues
35 McDonald ‘would still go’ to Storey funeral if serving as taoiseach
36 Health officials ‘very concerned’ about foreign travel, says Donnelly
37 Covid-19 risks from international travel remain dangerously high
38 Greens criticised over moving biodiversity brief to housing department
39 Social media’s ‘toxic elements’ criticised by mental health minister
40 Sex, swearing and flushing the loo: How these films broke big-screen taboos
Real news has value SUBSCRIBE