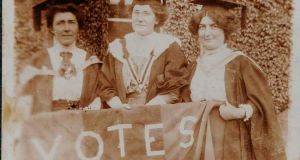 Almost 100 years ago women in Ireland and Britain over 30 years of age won the right to vote and to stand for election. If we scroll back to a few years earlier, we can see that Irish feminists and Irish republicans were far in advance of this limited concession passed by the British parliament.

In June 1912 Irish suffragists smashed window panes in the GPO and in other official buildings, frustrated by women’s exclusion from the terms of the Home Rule bill. Four years later the Easter Rising became, as suffrage campaigner Hanna Sheehy Skeffington recognised, “the first time in history that men, fighting for freedom, voluntarily included women”. A further landmark for Irish feminists was the election, in December 1918, of Constance Markievicz, a leading figure in the Rising, who became the first woman in Ireland or Britain to triumph at the ballot box. The Irish Citizen, paper of the Irish suffrage movement, was triumphant:

3 Diarmaid Ferriter: We are being infantilised on Covid-19 by an immature Government

7 How many masks should you wear while out and about this weekend?

12 Covid-19: Ireland could be ‘close to normal’ by end of year, says Dr Ronan Glynn

14 Sausage and egg muffin that’s better than the takeaway? Here’s how to do it at home

17 Kate Winslet: ‘I shouldn’t have worked with Woody. I’ll always grapple with that regret’

20 Public support for lockdown will nose dive once vulnerable vaccinated

21 ‘A lucky escape’: Woman rescued from sinkhole in sea off west Cork

24 Gwyneth Paltrow: ‘I’ve never been asked that question before. You’ve made me blush’

31 Ramona and Canice Nicholas to get €400,000 in Cara pharmacies exit deal

33 Why the sudden scramble to add sustainability to the C-Suite?

34 Ireland will be looking for that clinical edge in Rome, says Farrell

36 Covid-19 Vaccine Tracker: What's available in the Republic of Ireland and what else is coming?

39 The Movie Quiz: What was Popeye’s podiatry pointer?