Book Review: Paschal Donohoe on a rigorous book that posits a way beyond self-interest 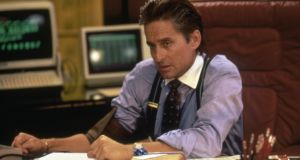 Michael Douglas as 1980s Wall Street predator Gordon Gekko. ‘The theme is evident from the title. Gekko is wrong. Greed is bad and it is dead.’

The happy coincidence of self-interest as a source of benefit to society is deeply embedded in narratives of how markets function. Adam Smith argued, in 1776, that “It is not from the benevolence of the butcher, the brewer, or the baker that we expect our dinner, but from their regard to their own self-interest”. His work laid the foundations for the belief that individuals acting in their own interest would be beneficial for all.

Smith’s philosophy was more nuanced; he grasped the roles of morality and sympathy as sources of social order. This nuance was lost in most subsequent interpretations of his thinking. Self-interest morphed into the deification, by some, of greed. Tragically, this spilled into the framework for regulating financial markets. The market, it was assumed, always knew best about everything.