“Governing Paddy has never been a hopeful or a pleasant task”

Review: Poverty and land lie at heart of K Theodore Hoppen’s Governing Hibernia as he traces how Britain ruled Ireland 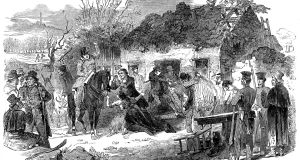 "Governing Paddy,” remarked the Lord Lieutenant John Wodehouse in 1865, “has never been a hopeful or a pleasant task.” From the Act of Union in 1800 to the Anglo-Irish Treaty of 1921, British politicians grappled with the Irish problem, trying unsuccessfully to make union between these two islands work. K. Theodore Hoppen meticulously traces British policymakers’ inconsistent governance of Ireland, arguing that it swung between two poles: “integration” (assimilating Ireland as an equal part of the UK) and “differentiation” (governing Ireland differently to mainland Britain).

At its beginning in 1800, Hoppen argues, the Union was about three things: the security of British rule, the Empire, and the threat of France. Everything else, he writes, was “hot air”, but there was certainly a lot of that around, especially about spreading “civilisation” to the Irish. Early enthusiasm (both real and cynical) for unity, however, swiftly gave way to a view that Ireland was in such a “backwards” state that governing it like “another England” was impossible.

Politicians “ransacked the globe” to find “territories of equivalent psychological remoteness”, comparing an island just 70 miles away to Kamchatka or Tibet.

After Catholic Emancipation in 1829, liberal thinking turned British governance towards integration, seeking to “assimilate” or “blend” the two nations, increasingly making (in the words of Daniel O’Connell) “no distinction between Yorkshire and Carlow”.

Indeed, despite his pursuit of devolution, Hoppen sees O’Connell as the “arch-assimilationist”, pursuing “complete equality” between the two islands (though he did not go as far as Munster-born Chancellor Thomas Spring-Rice, who proposed renaming Scotland and Ireland “North Britain” and “West Britain”).

Poverty and land are rightly at the heart of Hoppen’s book, and the lie of equal Union was shamefully exposed during the Great Famine.

After initially insisting that it was a “bounden duty” to support Ireland “from the resources of the United Kingdom, of which she is an integral part”, the government backtracked.

Hoppen argues that the decision to try and fund relief locally “completely undermined the basic principles of the Union”, a point not lost on some British politicians.

The Viceroy Lord Clarendon (George William Frederick Villiers) told the Prime Minister John Russell in 1849 that he could think of no other European state “that would disregard such sufferings . . . or coldly persist in a policy of extermination”.

Chief Poor Law Commissioner Edward Twisleton resigned in 1849 saying that it was repugnant that Ireland’s “brothers” in the Union had chosen to “look on and let them die”.

Indeed, despite Chancellor Charles Wood’s claim that “so much was never done for any country by another”, Hoppen notes that the Treasury spent significantly less on famine relief than it had compensating former slave owners (including many in Ireland) for emancipation the previous decade.

There was an ugly undercurrent of prejudice too, with dehumanising descriptions of Irish people common: Hoppen does a particularly good job bringing together private correspondence and official policy to reconstruct the political mindset.

Many saw the famine as, in Wood’s words, “a national visitation, sent by Providence”, and optimistically thought it might be “the salvation of the country” or “England’s opportunity”.

Ireland’s rotten agrarian system – from “spendthrift squireens” at the top to “squatter cottiers” at the bottom – could now be swept away, and replaced by English-style rural capitalism.

This “implied”, said Lord Palmerston (Henry John Temple), mass emigration and eviction, but the government was convinced such a “revolution” was positive, “even if”, as Prime Minister Russell put it, “much misery will be endured in the process”.

Ireland’s “bad resident gentry” were constant figures of disdain and frustration in London (Chief Secretary Edward Horsman said in 1855 that some “deserved to be murdered”), but most landlords survived 1850s attempts to force improvement and land reform.

Emigration and farm consolidations did, however, lead to what Dublin Castle saw as “slow and steady improvement” in rural society.

Yet, by the late 1860s, policymakers were frustrated by the lack of “symptoms of improvement and progress”, especially when the country was rocked by agricultural depression and Fenian unrest.

Policy changed again, with a view that Ireland’s long history of misrule (Hoppen identifies a vein of “guilt” in many British politicians’ attitudes) meant that Irish problems required Irish solutions, and so the island had to be governed “according to Irish ideas”.

The government’s two major Irish policies – massive expenditure on land reform and “coercion” to suppress dissent – would never, Hoppen argues, have even been tried in the mainland UK.

Ruling Ireland differently fuelled debates over Irish “nationhood”, an issue in which both parties tied themselves in knots.

William Gladstone and the Liberals eventually accepted the idea of “Ireland a nation”, but hoped Home Rule would strengthen the Union rather than separatism.

Ireland was caught in a no-man’s land between equal Union and colonial rule, and cultural and political developments in Ireland fed off these contradictions and failures.

British politicians continued to find it impossible to square the various circles, especially when (long-standing) regional divides in Ireland brought “the Ulster question” to the forefront of debates on devolution.

The lack of viable alternatives to partition convinced many in Britain that, as one MP put it, “orange bitters will never mix with Irish whiskey”.

Hoppen argues that the events of the 1910s caused an “acceleration” of pre-existing developments rather than a “change of direction”: the 1921 settlement was not an “inevitable” result of British policy since 1870, but it was a “logical and relevant” outcome to the abandonment of integration and the contradictions and failures of differentiated rule, especially with “self-determination” the ascendant idea of European politics.

Yet, 1914’s devolution within the Union was a long way from 1921’s “Free State” status: much did change utterly, and it is disappointing that British policy during the first Word War and the War of Independence receive comparatively little attention.

As Hoppen admits, British politicians are only part of the story: developments in Ireland also had profound influence.

But given our tendency to view the period as a struggle for independence, this fascinating book on the failure of the Union offers a useful change of perspective.

Dr Christopher Kissane is a historian at the London School of Economics and Political Science, and a BBC New Generation Thinker.