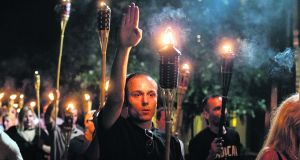 The internet arrived in our house when I was in my very late teens, around the turn of the millennium. Data moved as slowly as molasses through the ancient modem. None of my university accommodation was ever connected to the internet, so using email or web browsing meant a trip to the library. Smartphones only became established when I was in my mid-20s and already working as a journalist.

But despite having lived a lot of life either without the internet, or without much access to the internet, I struggle to remember what that life was like. Such is the glut of connectivity, and such is my own structural reliance on that connectivity, that I cannot say with any certainty which parts of life and work were better or worse before I had it.

1 Irish in Australia: ‘We are in for a few hard years’
2 Gardaí cannot prosecute people who breach midlands movement restrictions
3 German nudist chases wild boar that stole laptop at Berlin lake
4 All eyes on Tenet, the spy movie with everything to prove
5 Meet the Bearman of Buncrana: ‘I knew about Joe Exotic for years’
6 Covid-19: One more death and 174 further cases confirmed in State
7 Cambodia Bill to ban women wearing short skirts sparks outcry
8 Are we really facing the death of the office?
9 Midlands lockdown: ‘Why shut down Offaly and leave Dublin open?’
10 Midlands lockdown Q&A: Firstly, is it a lockdown or not?
11 Harry McGee: We are seeing the return of Straight-Talking Leo
12 Garda checkpoints in Kildare, Laois and Offaly as restrictions come into force
13 Meat plant clusters may be down to softly-softly approach
14 ‘Saudi Arabia is where the opportunities will happen in future’
15 Revealed: the NPHET advice to Cabinet ahead of midlands lockdown
16 Breda O’Brien: Euthanasia is symptom of society which does not care
17 The battle to save an Irishman’s eclectic art collection in a London council flat
18 ‘It is soul destroying’: Kildare hotelier on calling guests to cancel
19 Pat Hume: The woman who never gave up
20 The sad, secret life of Whitney Houston
21 Inside the dog-trafficking trade: ‘After drugs, it’s guns, then pups’
22 Summer sun: Temperatures set to soar to 26 degrees
23 Netflix’s 10 most watched movies – and what the list reveals
24 Tanya Sweeney: You get a lot of brain space back when you stop hating your body
25 Rory McIlroy puts integrity ahead of glory in US PGA second round
26 Sand-hued cyclepaths changing the face of south Dublin coast
27 Is it not time we celebrate Ireland and Britain’s closely intertwined culture?
28 Thousands protest against Netanyahu over Covid-19 and alleged graft
29 Pandemic problems: Experts answer your queries on sex, parenting and relationships
30 As Irish economy reawakens, we find Sleeping Beauty has a hangover
31 How the zombie apocalypse can help prepare us for real crises
32 Planning a move to New Zealand? Here’s everything you need to know
33 Trump to sign executive orders for coronavirus stimulus
34 David McWilliams: John Hume understood the power of credit
35 'There is no way I would go' - Irishman in Malta cancels trip home as two weddings put off
36 Scarlet for ya: Paul Mescal does classic Connell in The Rolling Stones’ new video
37 Erectile dysfunction or performance anxiety? This is not about sex, it is about shame
38 Summer style: the latest news in Irish fashion
39 Shay Kinsella obituary: Founder of Share a Dream charity for sick children
40 The end of the universe? ‘It’s a fun thing to think about astrophysically speaking’
Real news has value SUBSCRIBE