Gerald Murnane: A great writer with a mind unlike any other

Two collections, of essays and stories, cement him as Australia’s biggest unknown writer 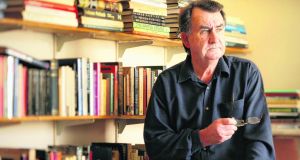 There’s something deeply paradoxical about Gerald Murnane and his work. He is Australia’s biggest unknown writer – frequently tipped for Nobel status, he has never attracted the attention of a wide readership. Last year we had the first UK and Irish publication of his earliest and most recent novels, which weren’t really novels. Now we have a collection of essays and a volume of stories, which – well. Read on.

To begin with, since the US publication of these books a few years ago, two of the stories (Stream System and Invisible Yet Enduring Lilacs) have moved into the other volume and become essays. Indeed, one of them is considered so quintessential an example of Murnane’s essay chops that it has given the book its title. Yet it was definitely a story a couple of years ago. What happened?

7 The outlook for vaccination is better than it seems

8 Hotel isolation for 20 states excludes US, UK where cases ‘rampant’

10 The Path Ahead: Full facts from Nphet paint stark picture

16 Has Dublin built too many luxury apartments?

18 Addicted to Diet Coke: My battle to beat a 27-year, seven-a-day habit

22 Gordon D’Arcy: No Irish player has inspired in the Six Nations like Seán O’Brien used to

25 How vaccine laggard CureVac hopes to come out on top

26 Lack of trust causing women to put their lives at risk, CervicalCheck warns

27 Vicky Phelan: ‘I was just sitting in the back of the car bawling’

28 Enda McDonagh obituary: A theologian scholar with a towering intellect

29 Northern Ireland protocol: Unionism shoots itself in the foot

35 ‘People think I either have to be Irish or Filipino, but I can be both’

36 Northern census should bring some clarity to Border poll debate

38 ‘The type of pornography that my partner watches upsets me’

40 Rory McIlroy: I think everyone should just be grateful Tiger Woods is alive