The Leinster and Ireland Lion is smart, good fun, hard-working and devoid of notions 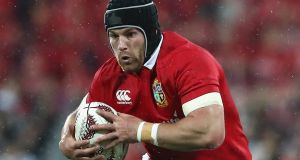 While Irish rugby enjoyed unparalleled success under Joe Schmidt, in 2019 a repeated criticism made of the team was that it had become over-structured and predictable.

Similar difficulties afflict recent autobiographies by some of the team’s stars. The books begin where the stories end; in the dressing-room after the player’s last match, head bowed in defeat. There then follows a chronological account of the player’s life: his early years, his rise through the provincial and national ranks, a list of some of the more memorable wins and losses, with a couple of off-pitch yarns thrown in for spice.

In truth this is an inherent flaw in most sports biographies. Readers seeking to recapture the excitement of the hero’s past glories are usually disappointed, since the details of the action frequently pall on the page.

However, there’s an engaging frankness about Seán O’Brien. His voice is convincingly reproduced by Gerry Thornley; no expletives were deleted in the writing of this book. As well as recounting his days as an under-age GAA player (Mickey Harte identified him, aged 16, as “a star in the making”) O’Brien also speaks openly about his difficulties growing up as a middle child in a house where his mother and father rowed constantly.

Later a psychologist helps him to identify his childhood distress at the breakdown of his parents’ relationship as the root of his inability to trust other people, or himself. O’Brien’s willingness (need?) to help out anyone who asks a favour makes him a target; he spends so much time on the road to Carlow that Johnny Sexton calls him “the Mayor of Tullow”.

Sexton is a fan. “The best forward I’ve ever played with,” he texts the injured O’Brien before the 2019 Pro 14 Final, inviting him to lift the trophy if they win, and adding cheekily “Try not to be too drunk”.

O’Brien comes across as likeable and decent, and a great man to go on the lash with; he says the second days of celebratory boozing sessions are usually the best. His easy-going nature endears him to rugby and non-rugby supporters, though the pervasiveness of social media means any off-field antics are widely shared. A video of him twirling an adoring fan in an impromptu Dirty Dancing routine – in a late-night chipper – goes viral, and O’Brien worries what Joe Schmidt’s reaction will be, since no detail escapes the coach’s beady eye.

There are times when The Tullow Tank (as the New Zealand media admiringly christen him) is running on empty. Paul O’Connell tells him he has the potential to be Irish captain if he’ll only stop burning the candle at both ends. In 2016/’17 with the help of sports psychologist Enda McNulty he resolves to become the best wing-forward in the world. He cuts out “derailers” like junk food and charity gigs, and even sells 60 cattle to avoid the distraction of having to look after them. By the summer of 2017 he has achieved his aim, diving over the New Zealand line to score a memorable Lions try.

O’Brien’s warrior-like commitment made him a joy to watch and to play with. He admits choosing rugby over GAA because of the pleasure he gets running over or through rather than round opposition players. Hard as nails, he’s also hard on himself, and on others when they deserve it. After the 2017 Lions tour, he criticises Rob Howley’s communication skills, lamenting that with the players the Lions had, they should have won the series 3-0.

He’s unsparing about the Irish team, complaining that they didn’t hate the opposition, and hadn’t enough “dog”. The Leinster team, he notes, didn’t become champions until they began to really dislike their rivals Munster. He has high praise for Joe Schmidt, but wonders if the Irish team lost some hardness and emotional edge because the players were too focussed on the detail.

O’Brien’s own emotional vulnerability occasionally rises to the surface. He weeps at his suspension following a dig he gives Pascal Papé during the 2015 World Cup, because he has let his team down; the single biggest regret of his career, O’Brien says, blaming himself for Ireland’s failure to win the quarter-final against Argentina without him. He cries on his last night out with Leinster, which ends ignominiously in the doorway of the toilets in Cassidy’s pub. There are also tears as the medics assess his battered body and tell him – yet again – that his season is over.

It would be harsh to view these tears as Gazza-like self-pity. For any competitive athlete the frustration caused by injury is enormous, and the physical toll on O’Brien’s body is horrifying: four hip operations, three shoulder surgeries, a broken arm, fingers, thumbs. Yet O’Brien’s determination is remarkable; the day after a hip procedure, he is in the hospital physio room on an exercise bike.

There are quaint reminders of more innocent days. The IRFU letter inviting him to join the Ireland under-18 squad advises sternly that “supervised study time will be available; please remember to bring your books”.

His early fondness for spicy wedges and pizza is a challenge to the nutritionists and dietitians, though he’s not the only Academy player carrying a few pounds; Johnny Sexton, he says, was “quite pudgy” then. It’s appropriate that one of his party pieces is The Jumbo Breakfast Roll; if anyone is to play O’Brien in the movie of his life, it will surely be Pat Shortt.

Like O’Brien at times, however, the book could have been a lot leaner. The description of various matches will become wearisome for all but the most devoted followers. O’Brien is fiercely loyal to his home place, and grateful to the many locals who helped him to become Carlow’s first rugby international, but some of the details feel like padding; why do we need to know that two of the people living near Tullow RFC are gardaí?

O’Brien acknowledges he was lucky; he made it, he says, not because of the Irish Player Development Programme, but despite it. Youths players need three years of academy development to become professional rugby players, whereas rugby-playing schools players only need one or two. This is a systemic problem within Irish rugby, he thinks: how many other Seán O’Briens, Tadgh Furlongs and Shane Horgans are out there waiting to be discovered?

He is also irritated by the IRFU’s indifference at the end of his international career. Like others, he’s uncertain about what will happen when his playing days are over. I suspect he’ll do just grand. Smart, good-humoured, hard-working and utterly devoid of notions, O’Brien remains a man you’d want beside you in a tight corner – and in the corner of the snug.

John O’Donnell is a Leinster and Ireland supporter. His collection of short stories, Almost the Same Blue, is published by Doire Press