From save Salman to Brits out: The politics of Samuel Beckett 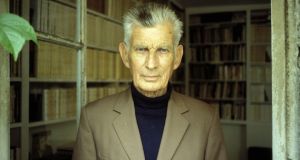 “Revolted but not revolting”: this is how Samuel Beckett described himself to Lawrence Harvey, the first scholar with whom he talked about his life and work in detail. He is often thought to be “almost totally nonpolitical” (in the words of Alan Astro), “consistent in his apolitical behaviour” (in the words of Deirdre Bair), or “resolutely unpolitical” (in the words of Robert Brustein), but Beckett’s words reflect his distinctive approach to politics. There are no photographs of him marching with a banner, but there is plenty to demonstrate the steadfast support he brought to campaigns for civil liberties, justice and freedom of speech and movement over the course of his career. His commitment to revolt was not restricted to a single cause, movement or indeed moment.

Aidan Higgins, one of the many Irish writers with whom Beckett struck a friendship, remembered him as someone who was haunted by the events that had unfolded in Paris during the second World War. Likewise, John Montague sketched the portrait of an artist who felt the ailments of the world at the very core of his being. For Montague, Beckett saw “naked pain and suffering everywhere” and a humanity “on its knees”. “Everything is on fire,” Beckett once confided.

He sometimes suggested that he didn’t feel at home in his century, and was deeply aware of the ways in which the semblance of normality could conceal a society teetering on the edge of disaster and collapse. Perhaps he knew too much about political strife: after all, he watched the unmaking of Europe as we know it as well as its reconstruction. His own political experience certainly exceeded the norm. He witnessed severe political convulsions and turmoil in the Irish Free State, during his travels through Hitler’s Germany, and during his time serving in the French Resistance in 1941 and 1942, when he translated military information for a resistance cell under the command of British SOE. Later colonial wars – in particular, the Algerian war of independence – were part of his everyday landscape in Paris.

The archives, too often forgotten, yield an image of Beckett that is far removed from common assumptions. Indeed he began to sign petitions when he started to make a name for himself as a writer: in the early 1930s, when few in Dublin and elsewhere had heard of him, he endorsed an appeal issued by his friend Nancy Cunard to support the Scottsboro Boys – the nine black teenagers from Alabama falsely accused of rape. The last petition he signed, some months before his death in 1989, was an international appeal denouncing the fatwa against Salman Rushdie.

Throughout his career, he lent his support to artists, writers and thinkers whenever he thought that his contribution could make a difference. He defended politicised intellectuals in jeopardy: in 1969, shortly after he received the Nobel Prize, he signed a petition supporting the French writer and political thinker Régis Debray, who was serving a prison sentence in Bolivia, and was convicted for assisting Che Guevara in an attempted coup d’état.

In the 1970s and 1980s, he became particularly sensitive to the situation of Soviet political prisoners and signed documents asking for the release of Jewish dissenters, intellectuals, and scientists who were imprisoned, serving a forced labour sentence or assigned to residence in the Soviet Union. He endorsed petitions defending influential figures such as the doctor Mikhail Shtern, the human rights activist Anatoly Sharansky, and the psychiatrist Semyon Gluzman. With other international artists, he signed an appeal inviting the French nation to vote for the Socialist Party in the 1986 French parliamentary elections.

Although many of the petitions Beckett signed were published or discussed in large-circulation newspapers, his name remained largely unnoticed among more obviously “political” writers. This is unsurprising, for it was often thought that Beckett had little interest in the outside world and preferred absolute solitude. Many of his interlocutors have described him as melancholic, austere and withdrawn. Yet there is also another Beckett, who was knowledgeable about world politics and believed that he could contribute to a better world. He read newspapers assiduously and sustained conversations and friendships with politicised writers, publishers and artists across Europe and North America. His French and American publishers, the Editions de Minuit and Grove Press, published his plays and novels alongside influential political texts by Leon Trotsky, Herbert Marcuse, Nelson Mandela, Roger Casement or Malcolm X.

When it came to Irish politics, Beckett didn’t always do nuance. A character in his first novel, Dream of Fair to Middling Women, is pictured screaming on the streets of Dublin that the country needs to look for a new path, away from the “pestiferous” green: it needs “red for a change and plenty of it”. “Get the British out of Ireland” was his response to Mel Gussow, the New York Times theatre critic, who had inquired about his views on a possible settlement between the IRA and the British government in the mid-1980s.

Writers, no matter what their interests, are not in the main political activists. Beckett was well aware of this fact and sometimes seemed to regret the way things had turned out. He once confided to the writer Kay Boyle, who was committed to direct political action and public protest, that he would have been a better person and a better artist if he had been more like her. A few years later, to another acquaintance, he deplored the inefficacy of politicians in the face of suffering, and said that he had “wasted his life”, having “dealt with nothing but words”.

Beckett is a writer whose work gains deep meaning in difficult times. Perhaps he will be remembered one day for the example he set – as someone for whom, in politics, action mattered more than words.