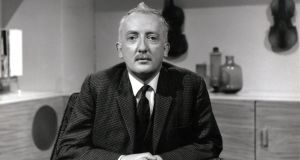 Seán Ó Riada: his church music has forged a unique place in the spiritual imagination of the Irish people

Some 25 years after the liturgical reforms of Vatican II, the people of a small village perched on the edge of the Atlantic gathered at a farewell meal for their outgoing parish priest. In the course of the evening, various contributors voiced their appreciation of all that had been achieved during his time amongst them. Two principal themes emerged. The first was that the parish was soon to have a new church, a new place to pray, of which all were understandably proud. Coming a surprisingly close second was the community’s sense of gratitude for the fact that the priest had taught them to sing Seán Ó Riada’s Ár nAthair at Mass.

A new way to pray – this was a theme very close to the hearts of the Vatican II reformers as they welcomed vernacular languages and increased community involvement in the liturgy. Attention had also been focused from the outset on the musical heritage of individual peoples, with a view to identifying elements of worship which could be adapted to their native genius. In the spring of 1968, a number of Irish church musicians gathered in Glenstal Abbey to discuss the implications of the recently-promulgated Instruction on Music in the Liturgy, Musicam Sacram, which included the following reflections on the challenges ahead:

Adapting sacred music for those regions which possess a musical tradition of their own….will require a very specialized preparation…It will be a question in fact of how to harmonise the sense of the sacred with the spirit, traditions and characteristic expressions proper to each of these peoples. Those who work in this field should have a sufficient knowledge both of the liturgy and musical tradition of the Church, and of the language, popular songs and other characteristic expressions of the people for whose benefit they are working.

As one of the panellists of the Glenstal symposium, Ó Riada would have noted this paragraph with particular interest. Five years earlier, he had obtained a music lectureship at University College Cork, and taken the decision to embrace fully all aspects of native Irish culture by moving his family to the west Cork Gaeltacht area of Cúil Aodha. The following year he had formed a church choir of local men (later to become known as Cór Chúil Aodha), many of them accomplished traditional singers, and together they had been working on a combination of traditional Latin chants and a growing body of native vernacular religious texts for which Ó Riada provided musical settings. These settings drew increasingly on the vibrant tradition of song for which the area was renowned and which provided the composer with a working, living language.

In his essay, Ó Riada at Glenstal Abbey, the Benedictine monk Dom Paul McDonnell recounts how, for the Christmas of 1968, he sent a greeting card to Ó Riada, the main illustration of which was the plainchant melody of a Gospel acclamation for long in use in the monastic liturgy. “By return of post,” he recalls, “he sent a plain postcard on which he had scribbled the Our Father in Irish, set to his own music.”

The hand-written setting, marked “go mall, oscailte, sean-nósach”, is quite clearly in traditional Irish song style. The significance of this exchange between the monk and the musician is difficult to overstate. McDonnell sends, from the heart of the Latin tradition, a hallowed chant from the Church’s universal canon, while in response, Ó Riada sends, from the heart of the Gaeltacht, his own musical setting of the Lord’s Prayer, as realised in the distinctive rhythms of Irish prose.

The nature of Ó Riada’s reply certainly bespoke a confidence, perhaps not so much in his own abilities as in the artistic richness and potential of the native tradition. The composition itself, comprised of living musical gestures expertly woven into the unique textual structure of this pre-eminent Christian prayer, managed to distil within a few bars the essence of what might be possible in the future interplay of two rich traditions.

As things turned out, this setting, which McDonnell reckoned to be the composer’s “first essay in liturgical music”, and which lay at the heart of his immensely popular Mass, Ceol an Aifrinn, was to mark the beginning of a process, initiated by the composer and continued to this day in the work of his son Peadar Ó Riada, an organic development which has already produced a sizeable body of Irish vernacular settings for the liturgy.

The Masses of Seán and Peadar Ó Riada: Explorations in Vernacular Chant considers the compositional significance of this output. Published in the 50th anniversary year of the Vatican II instruction Musicam Sacram, it examines in detail the contents of Ceol an Aifrinn, together with those of the composer’s Aifreann 2 (written for the Benedictines at Glenstal Abbey) and Aifreann Eoin na Croise, written by Peadar Ó Riada for the Carmelite community of Clarendon Street.

The material, presented in musical score and on an accompanying CD, is considered from the following perspectives: as emanating from a living culture of native traditional song; as part of a historical continuum of monophonic liturgical composition for the Roman rite; as part of a broader aesthetic context of text-music relationships found in the repertoires of plainchant, medieval song and folksong; and finally, as part of the new liturgical reality brought about by the reforms of Vatican II.

The book assesses the achievements of both composers, measuring their work against the heritage, discipline and compositional principles of western plainchant, and heralding its significance as a model for contemporary vernacular liturgical music. Particular light is shed on the work of Peadar Ó Riada, who, of the two composers, is shown to be the more profoundly “traditional” in his approach.

Over the past 50 years, Ó Riada’s church music has forged a unique place in the spiritual imagination of the Irish people. The majestic strains of Ag Críost an síol express and celebrate a richly-inclusive vision of human life from the seed to the harvest, from the womb to the tomb and beyond, and phrases such as “i líonta Dé go gcastar sinn” may, for instance, be found on seaboard memorials from Portmagee to Killybegs.

For its own part, almost five decades later, the confident, uplifting strains of Seán Ó Riada’s Ár nAthair continue to resound in parishes throughout Ireland, forging a unique bridge between speech and song, music and liturgy, earth and heaven.

John O’Keeffe, a native of Portmagee, is Director of Sacred Music at St Patrick’s College, Maynooth and Director of Choral Groups at Maynooth University. An early version of this article first appeared in Brendan Leahy and Salvador Ryan (eds), Treasures of Irish Christianity: People and Places, Images and Texts (Dublin: Veritas, 2012). The Masses of Seán and Peadar Ó Riada: Explorations in Vernacular Chant is published by Cork University Press.