French Exit by Patrick deWitt: laughter all the way

Despite its daft adventures, good jokes and amusing characters, the story flounders 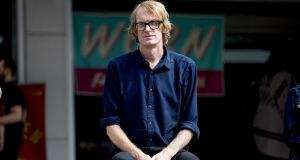 September must be the time for foreigners to arrive in Paris and either assimilate to the French way of life or ignore it completely. Earlier this month, we had Sebastian Faulks’ Paris Echo, which features a pair of strangers experiencing the city, one for the first time and one on a return visit, and now the Canadian writer Patrick deWitt tackles the same theme in one of those books that almost defies criticism, for it is so out-there, so utterly bizarre, that I suspect it will land on as many “best of” lists at year’s end as “worst of” ones. Not a bad thing, for it’s always interesting to encounter a novel so audacious and singular that it polarises readers from the first page.

French Exit features one of the most entertaining mother and son duos that I’ve encountered in fiction, Frances and Malcolm Price. In their mid-sixties and early-thirties respectively, they’ve been accustomed to a life of pure luxury in their Upper West Side home but now find themselves in penury due to Frances’ excessive spending and have no choice but to flee the US for a friend’s apartment in Paris.

1 Sideline Cut: Vignette shows why Bird is the true shark in The Last Dance
2 We need to pay very close attention to what is happening in Britain now
3 Trump says, ‘I have the best words.’ Now this comedian’s going viral for lip-syncing them
4 ‘Wiggle like a snake, waddle like a duck’: Hucklebuck singer Brendan Bowyer dies at 81
5 Number of women dying by suicide increased by almost 50% last year
6 Irish tourists excluded from visiting Greece and Croatia
7 Turbocharge your barbecue: Tips from the pros for cooking over flames
8 Elon Musk’s SpaceX suit: James Bond meets James T Kirk
9 ‘I’m so lucky to be in the Caribbean – a million miles from Derry Girls’
10 Michael Smurfit: ‘I asked Trump to invite me to the White House for my 80th birthday’
11 Taoiseach has confirmed schools will reopen at the end of August
12 The strain is starting to tell on Brendan O’Connor
13 Why it’s important to get back to basics and learn to walk (properly) again
14 Garda to scale down Covid-19 enforcement for June bank holiday
15 Covid-19: Pupils may be kept apart in groups and pods when schools reopen
16 French Custard Flan: Pastry plus custard should not taste this good
17 Fintan O’Toole: Trial runs for fascism are in full flow
18 Derek Chauvin charged with murder in connection with death of George Floyd
19 Trump attacks China while announcing US withdrawal from WHO
20 Quarantine will cease within fortnight, Ryanair CEO claims
21 The Mayo man in New York teaching fitness classes from his rooftop
22 Phil Hogan ‘exploring idea’ of WTO director general role
23 Luke Kelly sculpture on Sheriff Street vandalised for fifth time
24 Boris Johnson had little choice but to back Dominic Cummings
25 Small businesses are cannon fodder in zealous anti-virus experiment
26 Minnesota police release CNN reporter arrested live on air
27 Covid-19: Tax on unemployment payment could be collected by reducing credits
28 The momentum behind calls to ease lockdown may become irresistible for politicians
29 ‘Maybe I was arrogant thinking Covid-19 wouldn’t affect me as badly as it did’
30 Almost 1,000 students fail to register before calculated grades deadline
31 Covid-19: People should keep record of who they meet to help contact tracers
32 Tax and the Pandemic Unemployment Payment: Your questions answered
33 Rise in pension age poses potential problem in coalition talks
34 Minnesota police officer charged with murder amid mounting unrest
35 Coronavirus crisis can change cities for the better
36 Forget the €350 sideshow, mass youth unemployment is the real threat
37 Irishwoman in New York: I didn’t fear getting Covid-19 but I should have
38 ‘God couldn’t have come up with a better pathogen to attack theatre’
39 ‘Do I really care?’ Woody Allen comes out fighting
40 The chickpea stew that broke the internet in the US is here. Give it a go
Real news has value SUBSCRIBE