Forbidden Hollywood: How an Irish Catholic put a stop to titillation in Tinseltown

Book review: Juicier sex scenes, bloodier violence and racier dialogue being lapped up by cinema goers came to a shuddering end in 1934 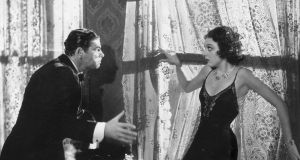 Anybody who has, over the past few decades, taken even a vague interest in cinema history will have come across the term “pre-code”. Relating to the four years between the widespread adoption of sound in 1929 and the strict enforcement of censorship guidelines, the hyphenate is now as rooted in the cinematic lexicon as “film noir” or “rom com”. It is used to describe not just films, but actors, directors and writers. Good luck getting through your first term of cinema studies without it.

One lesser achievement of Mark A Vieira’s beautifully produced book on the era is to confirm older readers’ suspicion that the ubiquity of “pre-code” is relatively recent. The author suggests that it was used first by programmer Bruce Goldstein in the late 1980s. The book is, thus, about a millennial reconsideration of an inter-war period.

1 Helen McEntee holds up well for someone with barely a leg to stand on
2 Restaurants and gastropubs to reopen in December under Government plan
3 Admission of mistake in Oxford vaccine dose raises doubts over reliability
4 In Brexit end game, Johnson scours menu of unpalatable choices
5 The Crown’s Josh O’Connor: ‘I’m a republican. I’m not interested in the royal family’
6 Saoirse Ronan and Daniel Day-Lewis on ‘greatest 21st-century actors’ list
7 Trump signals White House exit if Biden wins electoral college vote
8 Louise O’Neill: ‘Fairytale of New York makes me grit my teeth’
9 Cliff Taylor: Deal or no deal we are now heading for a hard Brexit
10 Ireland ‘will do well’ out of €5 billion Brexit fund, says Coveney
11 Michael J Fox: ‘In the wheelchair, I’m luggage. No one listens to luggage’
12 Move to EU or face disruption, City of London is warned
13 Breakfast in Ballsbridge: When Audrey Hepburn met her dad in Dublin
14 400 – yes, 400! – Irish retailers for all your online Christmas shopping
15 Ranelagh’s brand new street with three-beds from €1.325m
16 Maradona’s terrible, terminal journey from human to myth divided him in two
17 Tánaiste denies telling McEntee to appoint Woulfe
18 How to hold a referendum on Irish unity
19 Michael Flatley’s house clear-out: from Hannibal Lecter mask for €85,000 to ‘gorgeous cushions’ for €190
20 West Cork castle shell sells in weeks for around €2.7m
21 Q&A: What restrictions are going to be lifted next week?
22 Wild Mountain Thyme director says Irish accents are hard to understand
23 A bridge, a border and two Covid worlds
24 School leggings controversy: Anatomy of a social media firestorm
25 Amnesty and freedom of conscience
26 Judges must be seen to be able to ‘speak truth to power’, North’s Chief Justice says
27 Black Friday hotel deals: some of the best offers from around Ireland
28 Coronavirus: 335 new cases and three further deaths
29 Coronavirus: HSE departure from Kerry nursing home of ‘serious concern’
30 Up to 2,000 cancers may be ‘lost’ because of Covid disruption
31 Diarmuid Martin’s successor must be cut from the same cloth
32 Boy (4) left in hospital for over two years due to Tusla and HSE failings, report says
33 Original villa joins Dublin 8 revival for €825k
34 Autumn Nations Cup - Ireland v Georgia: TV details, kick-off time, team news and more
35 State faces challenges in recruiting health staff, Minister tells psychiatric nurses
36 Dallas Cowboys strength and conditioning coach Markus Paul dies
37 Feidhlim Kelly: Athletics competition needs a roadmap to recovery and fast
38 Netflix’s 10 most watched movies – and what the list reveals
39 Third-level colleges aim to resume more face-to-face teaching early next year
40 Helena Bonham Carter: ‘People choose to sleep with powerful people. I got two children out of it’
Real news has value SUBSCRIBE