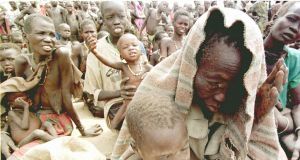 “The most destructive object on the planet,” writes Julian Cribb in this alarming assessment of our food future, is “the human jawbone. It is presently devouring the Earth – and that is not a wise strategy for our long-term survival”. Our rapacious desire to consume has caused wars, built empires, permanently changed the Earth’s ecosystem, and is now pushing humanity towards a cliff edge. Climate change, environmental degradation, unsustainable growth, and industrialised agriculture are part of a toxic cocktail that means “the world faces the greatest threat to global food supply in all of human history”. With the Earth’s ecosystem creaking under the weight of exploitation, Cribb sees a bleak food future of forced migration, hunger, and resource conflicts. “For thousands of years,” he warns, “famine and conflict have united in the human mind and destiny. And they will rule its future.”

An Australian science journalist and writer, Cribb’s work has often been apocalyptic, with previous books The Coming Famine, Poisoned Planet, and Surviving the 21st Century offering similarly horrifying assessments of the near future. But as the images of hellish inferno rising from Australia show us, we are past being able to ignore warnings that seem, at first, alarmist. Indeed, while Cribb’s conclusions are often too extreme (and his solutions unrealistic), he highlights crises being ignored, catastrophes going unaddressed, and problems that demand our attention before it is too late. Here his attention is on our most basic need, the very foundation of society itself. Our food system, he argues, “has never been more vulnerable or at greater risk of compound failure”.

1 ‘IRA has gone away’: McDonald responds to Garda Commissioner’s comments
2 A Dad with brain cancer: I was given 18 months to live, it put things into perspective
3 Drug dealer loses codes for €53.6m bitcoin accounts
4 Woman found living in squalor with flies coming from blanket she was using
5 Who turned up to the Dublin casting call seeking ‘bone thin, amputees, crooked teeth’?
6 Ireland Slam England at the Gardens to open up Grand ambitions
7 Ben Affleck: ‘It took me a long time to admit I am an alcoholic’
8 US attorney general to challenge retrial of convicted killers of Jason Corbett
9 More than 25 people to sue over circulation of images taken at Dublin Garda station
10 Knock gets visit from world’s largest passenger plane
11 MV Alta: The unmanned voyage of the Ballycotton ‘ghost ship’
12 Jogger injured by galloping horse could face substantial legal bill
13 Steve Coogan says ‘my Irish passport will be arriving shortly’
14 Soc Dems co-leader ‘unlikely’ to take part in FF-FG government
15 The close links between Sinn Féin and IRA untangled
16 L’Ecrivain, Derry Clarke’s Michelin-starred Dublin restaurant, to close after 31 years
17 ‘How can we torment a bunch of millennial snowflakes and get away with it?’
18 Stephen Collins: Reluctance of Fine Gael and Fianna Fáil to govern understandable
19 EU budget: Varadkar says Ireland willing to pay more but not at farmers’ expense
20 We carry these wounds through memories with us throughout our lives
21 Michelin chef posits a remedy for the age-old problem of bad hospital food
22 ‘Manchester United are lucky to have you’: Klopp responds to Donegal schoolboy’s letter
23 Garda Commissioner signals new drive against drug dealing
24 Nineteen staff made redundant by Nama share €1m
25 Hard Rock Hotel checks in to Dublin in €30m Tifco project
26 Men with catapults to protect Trumps from monkeys at Taj Mahal
27 Chance encounter with gardaí unmasked bitcoin millionaire drug dealer
28 Varadkar says any Fine Gael deal would have to recognise strength of its vote
29 How do you know if you are wealthy? It’s not straightforward
30 Leinster get the job done against Ospreys
31 Waterford hospital not to accept new urology referrals for six months
32 Weinstein jurors deadlocked on most serious charge, court hears
33 Connacht come away from Edinburgh with nothing
34 High Court quashes permission for Ronan dockland tower
35 Appeals board grants planning for 354 Greystones homes
36 Munster break Zebre resistance in second half
37 Why Sweden ditched its negative rate experiment
38 Solskjær backs Martial to get 20 goals for Manchester United for first time
39 Me & My Money: ‘I lost my life savings and more’
40 Hungry Ghosts – Frank McNally on the Roman festival of Feralia
Real news has value SUBSCRIBE