Following the money, mayhem and murder in Putin’s Russia 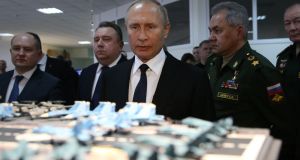 The picture of Putin’s rule that emerges from Catherine Belton’s book is of a corrupt regime, hostile to the West and ready to use its enormous wealth to undermine it. Photograph: Getty Images

Catherine Belton, an intrepid Financial Times journalist, has written a detailed study of the breathtaking financial transactions of Vladimir Putin’s elite. She explains how he and a small circle of men, drawn predominantly from his KGB contacts (the siloviki, whom he placed in key positions when he came to power) took over Yeltsin-era oligarchs’ assets and then those of the country’s biggest energy companies and enterprises, funnelling enormous sums abroad for their personal benefit and to advance Russia’s strategic goals, as they saw them.

Belton’s work on the financial dealings of Putin’s team is the most valuable aspect of  Putin’s People: How the KGB Took Back Russia and Then Took on the West (William Collins) and it should be required reading, as it reveals their political implications and the West’s inadequate regulation of and occasional complicity in them.

1 Midlands lockdown: Movement restrictions in place for residents of Kildare, Laois and Offaly
2 Main points: What restrictions have been imposed on Kildare, Offaly and Laois?
3 Coronavirus in Ireland: Four more deaths and 98 new cases reported
4 Masks Q&A: Who has to wear them in shops and what happens if you don’t?
5 Warning of ‘economic meltdown’ in Kildare
6 How a ship abandoned by its owner brought deadly cargo to Beirut
7 Scientists uncover biological signatures of the worst Covid-19 cases
8 Food myths busted: Are coffee and salt so bad for us? Are calorie counts worthwhile?
9 Covid-19 nonsense peddled by celebrities needs to be challenged
10 Officials refuse to rule out ‘Midlands lockdown’ following Covid-19 surge
11 Face coverings to be worn in Ireland’s secondary schools where 2m cannot be maintained
12 Authorities urge mask wearing as coronavirus on the rebound in Europe
13 Ireland's 'R number' of almost 2 a 'serious concern' as number of new cases jumps
14 Scarlet for ya: Paul Mescal does classic Connell in The Rolling Stones’ new video
15 ‘Coming home to Ireland felt like a gamble. I felt safe in Korea’
16 Production at Brady’s Ham plant in Kildare stops after 80 staff test positive for Covid-19
17 MSD buys Takeda biologics plant in Dunboyne
18 Reopening of schools in many EU countries has not led to Covid-19 increase, ECDC report finds
19 Second Midlands GAA club shuts down activity after outbreak among players
20 Court upholds challenge by intellectually disabled man who wants to marry
21 Meat plants Q&A: The lingering coronavirus threat
22 Coronavirus: Community transmission picking up pace as only eight counties see no increase in cases
23 Sligo meeting abandoned after four races due to safety concerns
24 Summer is on the way with warm sunny conditions for most of the next week
25 Why talking to strangers is good for you
26 Simon Coveney: Risk of nuclear catastrophe is unacceptably high
27 I have log cabin fever – the idea just won’t let go
28 State’s biggest landlord records 30% rise in rental income
29 'There is no way I would go' - Irishman in Malta cancels trip home as two weddings put off
30 ‘Saudi Arabia is where the opportunities will happen in future’
31 What will the office market look like after the great remote working experiment?
32 Gardaí surrender 13 people to Polish police
33 A new putter for Tiger Woods is something worth noting
34 Protests in Russia: regional revolts threaten Vladimir Putin
35 Home renovation basics: the costs and how to get started
36 Facebook agrees Irish wind-farm deal with Brookfield in Tipperary
37 What can €120k buy you in Italy, Greece, Cyprus, Lithuania and Louth?
38 Scars from the crash give Irish banks 2.6 billion reasons for Covid caution
39 Kate Tempest announces they are non-binary and changes name to Kae
40 At least 15 dead after Air India plane breaks in two in Kerala
Real news has value SUBSCRIBE