Fall: The Mystery of Robert Maxwell – Lively account of a press baron

John Preston fascinates with portrait of rags to riches narcissist, shapeshifter and survivor 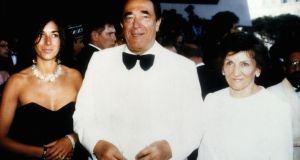 Robert Maxwell with daughter Ghislaine and wife Elisabeth: His narcissism and self-aggrandisement prompt comparisons with Trump, but the events of Maxwell’s life are graver and more shocking. Photograph: Mirrorpix/Getty Images

In the TV drama Mad Men, about postwar ad men in New York, the ageing secretary Miss Blankenship dies at her desk. Her boss, a partner at the firm, has to find a few words in tribute to someone viewers had known only as occasional annoying comic relief. “She was born in a barn in 1898. She died on the 37th floor of a skyscraper. She’s an astronaut.” The point being that the breakneck disruptions and advances of the 20th century meant even the most banal lives were epic in experience.

The life of the disgraced media baron and pension thief Robert Maxwell was certainly not banal. It was epic on a scale no sane screenwriter would attempt to boil into a single script. Such is the sheer volume of events in Maxwell’s life that John Preston’s engaging account, Fall: The Mystery of Robert Maxwell, sometimes has only a few paragraphs to deal with episodes that would justify a book on their own.

3 Robert Watt may seek to rein in Tony Holohan

7 Gordon D’Arcy: Béibhinn Parsons is the gift, IRFU must now do the giving

10 Kathy Sheridan: The online threat to the integrity of Irish elections lies within

12 Dublin is fifth most expensive place for renters in Europe

14 Everyday banking: Are we getting less but paying more?

15 What is unionism without the union? The question has us spooked

24 ‘I could attach 10 years of sadness to a throwaway comment, and nobody would know except me’

28 Food and mood: Why nutritional psychiatry is attracting attention

31 On the centenary of Northern Ireland’s birth, let’s imagine a potential rebirth of Ireland

34 Can I see copies of earlier wills my mother wrote?

38 Remains of mothers and babies should be ‘returned’ to families