Fact, fiction and family tension behind the ‘Little House’ books 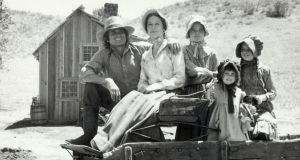 Laura Ingalls Wilder was a real person, but the famous children’s books that bear her name are not a factual account of her American pioneer childhood. Wilder was born in 1867 and died in 1957, and her Little House books have now sold millions of copies and been translated into more than 40 languages. Those are hard facts. What has always been a lot more amorphous about her work is where the lines between memoir and historical fiction meet.

This year is the 150th anniversary of Wilder’s birth, and Caroline Fraser’s book Prairie Fires: The American Dreams of Laura Ingalls Wilder, described as the “first comprehensive historical biography” of her, has just been published. In recent years, there has been an increasing body of scholarship on the life and work of both Wilder and her only child, Rose Wilder Lane.

The problem for anyone covering the Wilder field after 2014’s masterful Pioneer Girl: The Annotated Autobiography, is comparison with that seminal text. That rich and compelling book was the result of several years work by researchers at the South Dakota Historical Society, headed up by editor Pamela Smith Hill. The team took Wilder’s original unpublished memoir, as well as her papers and letters, and ran her text alongside historical context, census data, newspapers, maps, photographs, drawings, backstories about the fate of real characters and fascinating annotations by the different researchers. For me, a fan of Wilder’s work since childhood, Pioneer Girl remains to date the definitive work on her life.

Fraser is a thorough scholar. Her book comes in at more than 600 pages, with footnotes alone taking up some 80 of them. The title is misleading, however, in that while it refers to Wilder, the text gives at least as much attention to the life of Lane, also a writer. Fraser doggedly explores their complicated, symbiotic relationship, both as mother and daughter and as writers. It was Lane who guided, edited and bullied her mother as a writer; who sought escape, to France and Albania and yet who could never leave home and her mother for long; who overstretched herself by providing financially for the parents she often resented, giving them extravagant things they didn’t want, such as a new house.

As Fraser points out, Wilder’s life has been frequently sentimentalised, particularly in the television show that has almost nothing to do with what she describes as “the Shaker-like purity” of the books. Wilder is now a commercial brand. You can visit places where she lived, look at her possessions and buy period-style aprons and sun bonnets. Of course, you can also buy the books, the ever-green source of the brand. Her pitch-perfect books tell classic stories of hardship and survival, of family and neighbours, of weather and farming, of making-do and keeping going. But where did their truth lie, and who wrote those stories?

Fraser delves painstakingly into the process of how Wilder began to gather information about the minutiae of their childhood from her siblings, via letters, when she was deep in middle age. She wove these details into her spare, clear narrative; of making a rag doll, of creating a log house, of the dance at Grandpa’s after collecting maple syrup. It was Lane, uncredited with a byline, who edited out and rewrote and elided whole scenes from the manuscripts of Wilder’s life.

The account of an idealised childhood already gilded and smoothed over by the distance of decades became even more polished under Lane’s edits. Fraser calls it bluntly “their editorially incestuous phase”. She carefully unpicks the fractures in the narrative, with its “ambiguous relationship to the truth”.

The Ingalls family, for example, did not live in total isolation, with nobody close for 60 miles, when they lived at Silver Lake; they had near neighbours. Jack, the faithful family bulldog, did not lie down and die one night of old age in a memorable set-piece that made me cry as a child: Pa unsentimentally traded him, along with their horses. And so on, scene by scene, passage by passage, Fraser dismantles, examines and compares, with a near-wearying thoroughness.

We know that Lane and Wilder worked together, although we’ll never be certain where one’s input began and the other’s ended. We know that what is recounted in the Little House books is not “the whole truth”, as Wilder herself admitted. Some of the books were originally published as fiction, and others, such as On the Banks of Plum Creek, were subtitled The True Story of an American Pioneering Family.

Thus, although they were all part of the same series, right from the beginning, Wilder’s oeuvre has had a flexible relationship with facts. In truth, her books are clearly more historical fiction than memoir, but there is a place for superlative writing that endures, which conjures up the composite atmosphere of an era and those who lived through it. All these events recorded in the Little House books undoubtedly happened to someone at that time; just not all of them to Laura Ingalls Wilder.

I reached the end of this long book not understanding who Fraser was writing for. It’s too scholarly and laden down with dry historical and political context for a mainstream publisher (Fleet is a literary imprint of Little, Brown). It’s an earnest but clumsy addition to the Wilder canon compared with the marvellous Pioneer Girl, which has a far greater appeal to both the general reader and Wilder fan. In addition, it’s more a biography of Rose Wilder Lane’s life, who unfortunately emerges from this portrait as unlikeable, neurotic, and selfish, with poor judgment and carrying a permanent passive-aggressive grudge against the mother who would become the more famous writer. But it also made me want to go back and reread the books, yet again.