Book review: Not another biography of his unconventional career, but a study of his ideas 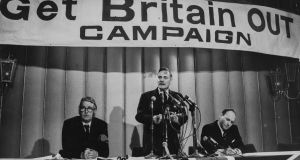 Like Tory Brexiteers, he weaponised racism and xenophobia, opposed guarantees of human rights, rejected constraints on the “free market”, and lionised “sovereignty”. Like Jeremy Corbyn, he opposed foreign military intervention, Britain’s nuclear arsenal, alliance with an imperial America, and British membership of a European Union.

3 No Irish howlers, but Prince Philip’s body language with McGuinness told a story

7 Warmer weather to coincide with lifting of 5km travel restrictions

13 Belgium, France, Italy, US and Canada among 16 countries added to mandatory quarantine list

16 Róisín Ingle: Dear Sister – Shame on the men of Dingle who praised your rapist

17 How to build a modern man: Helping boys to grow up happy

18 Harry and Meghan: The union of two great houses, the Windsors and the Celebrities, is complete

20 Remember when Ian Botham was going to be ‘the next James Bond’?

21 Sean Bean: ‘The mango sex scene was a new level of weirdness’

28 US Masters: Hideki Matsuyama shines after the rain to take control

29 Fintan O’Toole: I got a mortgage at 24 – unthinkable for today’s young adults

31 Leadership at issue as Fianna Fáil eyes prospects after pandemic

33 Independent butchers are one of Ireland’s culinary treasures

34 Cliff Taylor: There is a reckoning coming and big decisions lie ahead

40 Prince Philip: Irascible, possibly unfaithful – and, since The Crown, so incredibly glamorous