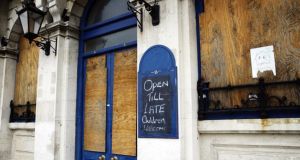 A little boy contemplates a picture hanging on the wall in a hotel room – where his father will soon shoot his mother and sister before turning the gun on himself. The narrator waxes poetic about this “masterpiece of luminescent highlighter pens” illustrating “one of those allegories popular in former times, Service Stations of the Cross”. Christ is depicted crucified on a random forecourt with Posh Spice weeping at his feet. Two “winged pump attendants” hover in the air holding a banner (advertising Mobil) “in typical period style”.

The whole scene, complete with gay centurions, is surveyed – for purposes of confusing onomastics – by Peter, Paul and Mary, the American folk trio. With its mock-heroic conflation of high and low, surreal collision between the archaic and contemporary, not to mention the shameless schoolboy punning, this piece of kitsch iconoclasm encapsulates the very essence of Endland.

11 ‘I got a burning smell in my nose’: Third-wave Covid-19 patients share their experiences

13 Covid-19 advice sent by text to 1,511 arrivals from Brazil amid new strain

14 Adoption ‘is for children, not for people who wish to be parents’

15 Away: After all those cheap and nasty children’s movies, here’s a gem

20 Ireland is 13th most expensive place to live, survey shows

26 Vaccine should not be given to people close to death, says HSE

27 Nuns who ran the Bessborough home in Cork sold part of site for €6.85m

28 ‘I’m the meme queen’: A QAnon digital soldier marches on

29 Joe Biden’s presidential inauguration: Where can I watch, and what are the key moments?

35 This warm, spicy stew can be rustled up in 15 minutes

36 Homeschooling is an utterly unworkable solution for so many

39 Developer challenges refusal of permission for 64 homes in Kildare