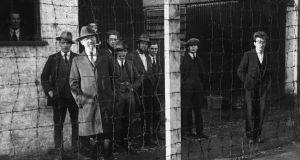 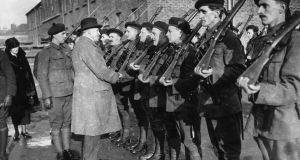 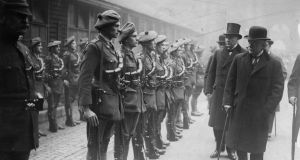 British prime minister David Lloyd George with his cabinet colleagues Andrew Bonar Law and Sir Hamar Greenwood inspecting officer cadets of the auxiliary division of the Royal Irish Constabulary in the quadrangle of the Foreign Office in London in 1921. Photograph: Hulton Archive/Getty Images

In the spring of 1920, with Ireland on the brink of partition and civil war, the British government made a surprising choice for the post of chief secretary for Ireland – a Canadian-born member of parliament with no cabinet experience.

Sir Hamar Greenwood was handed the daunting task of ending a worsening cycle of violence while overseeing a last-ditch attempt to establish Home Rule. His selection and troubled tenure highlights the British government’s failure to grasp the depth of Irish alienation and discontent by the early 1920s.

Empire and Ireland is the first biography of Greenwood, a self-made man whose formidable oratorical and networking skills catapulted him into the upper echelons of British politics. Roy MacLaren, a former diplomat and politician who served in Canada’s federal cabinet, tackles this enigmatic and overlooked figure in a richly researched account that is at once scholarly and readable. Winston Churchill’s wife Clementine dismissed Greenwood as “nothing but a blaspheming, hearty, vulgar, brave, knock-about Colonial” and MacLaren made it his mission to find out how much of her broad-brush assessment was accurate.

He was a “knock-about Colonial” who had struck out for the Mother Country as a young man. Born in small-town Ontario in 1870, just three years after Canada became a self-governing Dominion, he earned his passage to Britain as a stableman on a cattle boat. He arrived with little money and boundless ambition. In Queen Victoria’s sprawling empire, the transition from colonial backwater to the hub of imperial power could be surprisingly smooth; upwardly mobile Canadians of Greenwood’s generation already considered themselves Britons, MacLaren notes, so they were “simply going to another part of the British world”.

Greenwood had dabbled in theatre in Canada and was blessed with an actor’s ability to hold an audience’s attention. Far from blaspheming and vulgar, he was an austere non-drinker who was soon in demand as a speaker at temperance meetings across Britain. He was of Welsh descent and one of his first speaking engagements included future prime minister David Lloyd George, who became his patron.

Greenwood’s radical political views made him a natural fit for Lloyd George’s Liberal Party. Elected to parliament as a longshot candidate in the 1906 election (in those days, MacLaren notes, as many as a dozen Canadians sat at Westminster), he held a seat for most of the next 23 years.

Ireland’s tumultuous and violent march to independence is the backdrop for close to half of MacLaren’s book, and resolving the Irish question became an obsession for Greenwood. He styled himself a “Member for the Empire” and embraced Home Rule as the means to keep Ireland in his beloved imperial family. “Ireland has been shamefully treated,” he declared as early as 1911, and “is justly entitled to local self-government.”

By the time Greenwood was handed the chance to put his words into action, Britain’s priority in Ireland had shifted from granting self-government to suppressing violence. The Irish Republican Army was attacking and intimidating the local police, prompting Lloyd George’s government to send in the notorious “Black and Tans” – war veterans with little police training and less discipline – to restore order (the name came from the unit’s tossed-together uniforms that combined military khaki with dark green police gear).

To Lloyd George’s mind, Greenwood’s support for Home Rule and outsider status as a Canadian made him an inspired choice as chief secretary. Greenwood was also willing to take on a dangerous assignment – on this point, Clementine Churchill’s description of his bravery is apt – at a time when English officials in Ireland were targets for kidnappers and gunmen.

But, as MacLaren discovered, Greenwood was driven as much by personal ambition as a desire to set things right in Ireland. Overseeing the island’s transition to self-rule, he was convinced, would be a major step toward his ultimate goal, becoming home secretary.

Greenwood’s partner in his quest for advancement was his wife Margo, 17 years his junior. She was his “strong right arm”, he once noted, and proved to be as ambitious and attracted to power as he was. Her affair with the philandering Lloyd George undoubtedly boosted Greenwood’s political career (and likely earned him the baronetcy bestowed in 1915). She also acted as a go-between during his stint as chief secretary, surreptitiously passing information to officials in London and at Dublin Castle – often, it appears, without her husband’s knowledge.

Greenwood emerges in this book as a tragic figure, a well-intentioned man caught between the millstones of Irish nationalism and Britain’s postwar political instability. Lloyd George, desperate to keep his coalition government afloat, refused to take decisive action as the Irish crisis deepened for fear of alienating Conservative Party allies who backed the separation of Ulster from the Catholic south.

When Black and Tan renegades committed murder and arson in retaliation for IRA killings, it fell to Greenwood to try to defend their conduct. His speeches in the Commons, claiming that violence was under control despite the grim headlines, made him a laughing stock and a political pariah. The callous and self-centred Lloyd George, meanwhile, privately hoped the reprisals would wipe out the IRA and his Irish problems would be solved by bloodshed. “Shoot the rebels down,” he declared at one point. “That is the only way.”

MacLaren has done his homework and marshals his evidence with insight and precision. But he sometimes overwhelms the reader with repetition and unnecessary detail, as is the case with his blow-by-blow account of Greenwood’s two-and-a-half-year tenure as chief secretary and the political machinations swirling around him.

Greenwood never realised his dream of becoming home secretary (one of many victims of Lloyd George’s habit of failing to reward supporters for their efforts and loyalty) and ended his political days in the genteel surroundings of the House of Lords. And while his vision of Canadian-style Dominion status for Ireland was realised in the Anglo-Irish Treaty of 1921, it also sparked a civil war, formalised the separation of Northern Ireland and ultimately led to the establishment of the Irish Republic.

Churchill, whose assessment of Greenwood was more charitable than his wife’s, remembered his long-time colleague as a dedicated imperialist and Home Ruler who was “always hoping that the day would dawn when reconciliation could be effected between the two islands”.

The time for reconciliation, however, was long past. And Greenwood’s belief that the Irish would opt for empire over independence was out of touch with the demands and aspirations of Ireland on the cusp of nationhood.

Dean Jobb, a professor of journalism at the University of King’s College in Halifax, Nova Scotia, is the author of Empire of Deception, the untold story of a master swindler in 1920s Chicago