Self-publishing worked for the Dubliner, who released his first novel, ‘The Commitments’, himself. Now, with the likes of Amazon’s Kindle Direct Publishing and CreateSpace ventures, it can work for lots more people 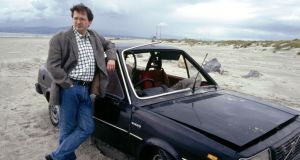 Shore thing: Roddy Doyle in the early 1990s, shortly after The Commitments was turned into a film. Photograph: Nutan/Gamma-Rapho via Getty

Mirror, mirror on the wall, who is the fairest publisher of all? Back in ancient times, when people read books made only of paper, authors who published their own work needed a thick skin and a big wallet. Self-publishing – or vanity publishing, as it was denigrated – was considered the last resort of rejected writers who couldn’t take no for an answer and were willing to pay for the privilege of seeing their book in print.

Success stories such as Roddy Doyle, who self-published The Commitments in 1987, did little to change this impression. If a mainstream publisher didn’t back a book, what was the use of bringing an also-ran into an already crowded arena?

Ebooks have eviscerated this elitist view by presenting writers with a cheap and easy way to publish work. For minimal cost, both aspiring and established authors can upload their books to a site such as Amazon, Smashwords or Wattpad and gain overnight access to global markets. This comes at a time of downturn and consolidation in traditional publishing. As the main players continue to battle each other – the merger of Penguin and Random House, last year, ended the big-six era – the self-publishing industry is enlisting at a ferocious pace, a guerrilla faction of hundreds of thousands of writers using the technologies at their disposal to storm the field.

Amazon has been at the forefront of legitimising this type of publishing, ranking independent titles alongside those from traditional houses, capitalising on it in the process with its Kindle Direct Publishing and CreateSpace ventures. The huge success of writers such as EL James and the Welsh teenager Beth Reeks has also contributed to the phenomenon, their ordinary backgrounds and seemingly straightforward routes to mass-market appeal inspiring others to take the plunge.


Digital bestsellers
Digital-bestseller lists are frequently topped or dominated by independent authors. One of them is the American author Hugh Howey, whose science-fiction series Wool has sold hundreds of thousands of copies. Frustrated by the lack of data available to writers on the merits of self-publishing, Howey recently compiled his own research by analysing nearly 7,000 titles from the thriller, romance and science-fiction genres on Amazon’s online bestseller lists.

According to his findings, more than half the titles fall into the self-published or small-press category. With most of the other titles coming from big names, he makes a good argument that debut novelists and midlist authors would be better served to PIY, or publish it yourself.

But Howey is in a privileged position that many aspiring authors can only dream of. Having walked away from some “incredible offers”, he is now published by Simon & Schuster in print in the US, having retained digital rights.

The vast majority of self-published authors earn far less for their efforts – writing, editing, designing and promoting a book – with returns under €500 the depressing norm in a number of studies.

“You can self-publish an ebook in minutes that will be for sale all over the world in a few hours, but it takes time, money and dedication to produce a book that people will pay to read. You then have to find those people and convince them to buy it. For me, the hardest part is that you’re essentially on your own. Lots of self-published authors talk about how great it is to have control, but the flip side of that coin is that the buck stops with you.”

Anya Wylde, a Dublin-based romance writer, says this element of control is key, as it allows her to publish when and as often as she wants. Currently working on her fourth book in less than two years, Wylde has ranked in the top 200 on Amazon’s online bestseller list and reached number one in niche categories such as humorous fiction, regency romance and historical mystery.

“I can upload the books and start selling them as soon as I feel they are ready,” says Wylde. “A major advantage of being self-published is having the freedom to set the price at a level you feel will sell and thereby gain readership. I can write what I want, price the book as I please, and I get to retain a higher royalty than I would if I went with a traditional publisher. Of course there are benefits of being with a good house with professional editors and a solid marketing strategy, but I think for a lot of new authors the support is not there, and the author is left to do most of their own marketing.”

Ebooks offer writers a way of getting their work into the world without breaking the bank and, if successful, a stronger hand to play when traditional publishers come calling. With the US author Brenna Aubrey recently turning down a six-figure deal, it appears that digital publishing is putting financial and creative control back in the hand that wields the pen. Hybrid authors like Howey, who sign print-only publishing deals, are also on the rise.

Whether this will filter down to the masses is debatable, but giving writers options where before they had none makes today’s publishing world the fairest of them all.