Dorothy Macardle: A biography which gives her the literary treatment she has long deserved

Book review: Leeann Lane does justice to the activist who has been unfairly underestimated 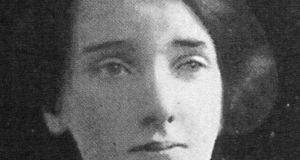 A great irony lies at the heart of the life and legacy of Dorothy Macardle. A fiercely independent and talented woman, who decried inequality between the sexes, she is chiefly remembered as the keeper of the reputation of a man: Eamon de Valera. In 1937, her book The Irish Republic was published; a large-scale history of the Irish revolution commissioned by de Valera. It came in the midst of the history wars prompted by the divisions over the Anglo-Irish Treaty that led to civil war, and unashamedly promoted the anti-Treaty position and therefore de Valera’s stance. It was much more than that - a decade of research underpinned it - but given her bias, the political polarisation of the era and de Valera’s visage gracing the cover, it became primarily associated with his contested stature. It was, however, just one of Macardle’s many endeavours; she was a teacher, political and social activist, journalist, playwright and novelist.

Leeann Lane deserves great credit for the originality and insightfulness of this biography; she has done justice to a complex and interesting career with a balanced analysis of Macardle’s words and deeds and has a confident grasp not just of the thundering political feuds that bordered her life, but also the subtleties and nuances of Macardle’s private thoughts. Lane proves her contention that Macardle “had a strong political influence in her own right” and that her gender, despite the ethos of her era, “did little to hinder the realisation of her intellectual aims”. Making the biographer’s task more complicated, and therefore Lane’s achievement more noteworthy, is that Macardle’s brother destroyed most of her papers on her death in 1958, and the biographer is left working with the fragments that survived.

1 Cork student fatally stabbed in the neck at house party named
2 Murdered and mutilated: Keane Mulready-Woods and the teenagers of gangland
3 Sinn Féin suspends councillor over ‘beyond offensive’ comments
4 Patrick Freyne: The mystery of Dermot Bannon and his many surrogate wives
5 Who was murdered teenager Keane Mulready-Woods?
6 Thousands of teachers to strike on February 4th
7 Our dream home came on the market. Then a nightmare followed
8 Teenage boys and organised crime gangs: A complicated dynamic
9 Simon Schama: Auschwitz and the new anti-Semitism
10 Two men seriously wounded in north Dublin gun attack
11 A Fine Gael-Fianna Fáil grand coalition could be what the country needs
12 Woman did not die at any of nine locations where body parts were found – court
13 Homelessness is caused by bad policies, not bad personal choices
14 Election adds to headaches for AIB boss Colin Hunt
15 Family of murdered teenager were sent video purporting to show killing
16 Life in Brexit Britain: The message is clear – fit in, or get out
17 Solidarity PBP say ‘alternative left government’ is possible
18 Election 2020: All you need to know about the upcoming general election
19 Tiny in the city, cosy in Blackrock: two to view this weekend
20 Varadkar defends Fine Gael’s record on law and order on visit to Drogheda
21 Irish people like nothing more than being bribed with their own money
22 Leaving Cert marks are altered as part of ‘unwritten policy’, claim examiners
23 Drogheda people ‘have reached threshold’ over Mulready-Woods killing
24 Ralph Hasenhüttl: Shane Long at the heart of Southampton revival
25 Construction body calls for loan scheme to help first-time buyers
26 James Ryan returns to the Leinster fold for Benetton clash
27 Seven-and-a-half years jail for man found with €1.1m worth of drugs in ‘socks’ box
28 Drogheda feud timeline: main events so far
29 Miriam Lord: Micheál Martin barrelled into a hair and beauty salon. No shame
30 Varadkar accepts apology from Sinn Féin councillor over ‘family man’ and ‘India’ comments
31 Man found with 230 buckets of Daz goes on trial
32 Tributes paid to Kilkenny man who ran New York’s oldest Irish pub
33 Patrick Freyne: It is now late-period Dermot Bannon. He is on the verge of losing it
34 The Irish economy is thriving but if you’re not feeling it – here’s why
35 We have already commemorated the RIC - 10 years ago
36 Climate apathy in Northern Ireland could impact on the Republic
37 Revealed: The fight to stop Samuel Beckett winning the Nobel prize
38 Being in Nama regarded as stigma in UK, O’Flynn tells court
39 First Look: Ireland’s new tiki bar gears up for opening
40 Killers may have photographed and videoed Drogheda boy’s body parts
Real news has value SUBSCRIBE