In 1988, I refused to shake the hand of Peter King. The show goes on, the struggle goes on 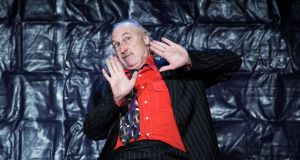 Donal O’Kelly in ‘Bat The Father Rabbit The Son’ in 2018. Photograph: Al Craig

I’m sitting in the tiny backstage area of the Irish Arts Centre in New York down in Hell’s Kitchen near the Hudson River. My show is over. Opening night, well, opening afternoon actually, on a Sunday. In the run-up to the 1988 presidential election, Bush versus Dukakis, the best time to get Irish-American movers and shakers to attend.

I’m sweating buckets. I haul the drenched red poloneck off over my silvered head. My sponge belly plops onto the floor. I’m told there are people waiting to meet me. I’m discombobulated. Been a whirlwind! Only weeks since it premiered in the Dublin Theatre Festival.

Went well. Lots of laughs and a standing ovation. But I’m still wondering did they get it, whatever it is. Sometimes I think it’s a load of baloney, this show I’ve written from the deep recesses of I-don’t-know-what. A show I started writing in Nicaragua when the first hummingbird I ever saw told me to! Have I lost the plot!? Bat The Father Rabbit The Son! The name is too long!

I scrape the black enamel off my teeth, that Rabbit Bugs-Bunnyish look. I wipe the lines from my face. Young again. Half Rabbit’s age, I’m only 30. Hoping the people waiting will disperse.

But they’re in a line on the steps in the foyer. A patter of applause breaks out. It must be some New York tradition. Terry George, director of the centre, introduces me to the first of the suits, a big guy with gimlet eyes, a firm chin and a cocked head. Peter King.

I hesitate. “Peter King, the Republican congressman”? I ask. He nods proudly while he reaches for my hand. I pull it back. “I won’t shake hands with you.”

Peter King was at the meeting in Texas that created the US-backed Contra mercenaries in Nicaragua. My friend Paul Laverty has documented Contra abuses for Scottish Medical Aid for Nicaragua while mounting a one-man challenge to US State Department propaganda against the Nicaraguan Sandinista government. Peter King’s Contras are inflicting horrific misery on innocent civilians in remote parts of Nicaragua.

He’s gone. I’m looking into a vaguely familiar pair of eyes. Bernadette McAliskey tells me Bat The Father is the spit of her granddad from Dublin. The youngest ever MP in the British parliament, the MP who slapped home secretary Reginald Maudling for lying that the Derry Bloody Sunday victims were armed, the MP who, given the keys of San José by the Irish-American mayor, gave them to the local leader of the Black Panther Movement, says Citizen Army member Bat reminds her of her Dublin granddad! My heart skips a beat. Peter King, you don’t matter one whit!

Thirty years later the Nicaraguan people are again facing a threat as the former Sandinista leader Daniel Ortega tightens his grip on power. The opposition is disparate, more than 40 organisations united in the aim of ending his rule. Since April up to 500 people have been killed, many by Ortega’s so-called “volunteer policemen” – government-backed paramilitaries. Thousands have fled.

The Latin American Support Committee held a meeting about the situation in Nicaragua in the Teacher’s Club, Parnell Square last month. I couldn’t be there as I was performing the first of 30 shows in the 30th anniversary tour of Bat The Father Rabbit The Son in the Hawk’s Well Sligo.

Part of me was there in spirit though. The spirit of that hummingbird I saw in Nicaragua that for reasons unknown made me think of Moore Street and Howth Harbour, and out into Dublin Bay and up the sniffy Liffey, and Liberty Hall how-are-yeh and the gulley in the floortiles down in the Rotunda, and the international banking centre that Rabbit cut the sod of under Charlie Haughey’s avaricious eye. The show goes on. The struggle goes on.
Donal O’Kelly is a playwright and actor. For information on his 30th anniversary tour of Bat The Father Rabbit The Son, visit batthefather.com