Dolores review: Short and potent story of a young woman in trouble 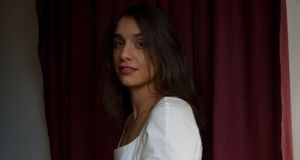 “At 15, Dolores began to visit the love motels on the outskirts of her city. Now, at night inside the convent, when she returns, the different rooms have merged into one.” Blurring the borders past and present, sex and religion, desire and shame, Lauren Aimee Curtis’ debut novel Dolores is a short and potent story of a young woman in trouble.

Though Curtis is Australian, the trouble is of a recognisably Irish nature – a pregnant teenage girl who ends up in a convent. The nuns take her in with the promise of salvation and a new identity that starts with a new name: “When the mother superior says her name, it sounds as though it were travelling down a slide. Do-lor-es.” Details of her new life as a nun-in-training come at the reader, fast and vivid: “The nuns never wash themselves. That’s one of the first things she notices. They have yellow-green gunk in the corners of their eyes, their tongues are brownish-pink, and there are flakes of dead skin on their noses.”

1 New coronavirus variant spreading across Europe, scientists warn
2 Cork shootings: Father and sons to be buried in two separate funerals
3 Jeremy Corbyn suspended from British Labour party
4 The real Contagion virus is out there and it’s causing virologists to worry
5 Children found dead in their Dublin home were murdered
6 Three killed, several wounded in knife attack in French church
7 Calm down covidiots, it’s nothing personal
8 School closures on the agenda following ASTI vote
9 Man found guilty of murdering girlfriend during drinking session
10 Aldi, Lidl bow to pressure to ban non-essential ‘middle aisle’ sales
11 In rural America, support for Trump is complicated by pandemic
12 Josh Hartnett: ‘Being hugely famous was never something I aspired to be’
13 Over 60% of mortgage holders miss chance to save €10,000
14 Two hundred Irish retailers for all your online Christmas shopping
15 Ireland, France or England? Who needs what to win the 2020 Six Nations
16 Revenue accused of harassing businesses over Covid wage subsidy scheme
17 Six within 60: homes to buy within an hour of the M50
18 Can Big Tech’s backing install Biden in the White House?
19 America at Large: Golfers guilty of legitimising Trump’s toxic regime
20 Court upholds restriction on identifying mother who smothered child
21 Young homeless mother may have been dead in tent for a number of days
22 No grand conspiracy to protect those responsible for mother and baby homes
23 The problem with preserving historic buildings – and why it needs to change
24 Newton Emerson: Money talks and waffle walks in Shared Island initiative
25 Medical gaslighting: The women not listened to or viewed as overdramatising or catastrophising
26 ‘This is not a personality contest’ - Jack Nicklaus endorses Donald Trump
27 Dublin City Council seeks to use Docklands tower block for social housing
28 Bodies of mother and two children removed from south Dublin house
29 Dublin Airport says pre-flight Covid tests possible ‘within days’
30 Grafton Street landlord cuts high street property values by 26%
31 Cork shootings: Gardaí believe older son was shot multiple times
32 Finn McRedmond: Why did the Tories get it so wrong over feeding children?
33 Cork shootings: Gardaí find lengthy apparent suicide note on one of the dead men
34 Mazda’s first EV requires mental recalibration
35 Five lessons of Stoicism: What I learned from living for a week as a Stoic
36 Michael Harding: Three reasons you’ll never see a cat in Donegal
37 Solskjær’s stock is on the rise again after clever squad rotation
38 Gael Fickou shifted to the wing as France name their XV
39 Irishwoman in Scotland: ‘The pandemic has brought me closer to home’
40 Stakeknife investigation: PPS decides not to charge four people
Real news has value SUBSCRIBE