Book review: We are only beginning to understand how our democracy has become frayed 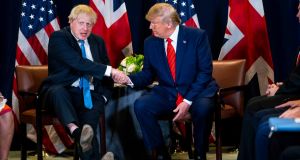 You don’t need to be sensitive to have detected a whiff coming off politics in certain countries in recent years. Brexit is the thing that brought the odour to immediate attention in this part of western Europe, but it didn’t begin with the campaign for Britain to leave the European Union, and after reading Peter Geoghegan’s unsparing account of shady money in politics, you would be naive to believe it will end there.

Geoghegan’s book, Democracy for Sale, is a plunge into waters we all knew were murky but had chosen not to spend too long gazing at. The book is not about Brexit alone, and indeed its focus moves beyond the continent of Europe, but the Leave campaign and its broader financial and philosophical ecosystem is certainly the animating core of the book.