Deaths of Despair and the Future of Capitalism review 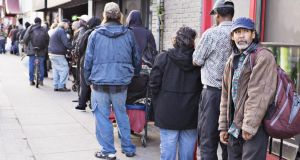 A globalised world has served to deliver an environment where working-class people are congested in where they live, but lonely in how they are expected to exist.

In the year following the first Moon landing of 1969, the poet and musician Gill- Scott Heron illustrated the inequality that existed between millions of impoverished African-Americans struggling to afford basic necessities and the soaring ambition of white America which had just spent $25.4 billion ($180 billion in today’s money) sending a few white men further than the American Dream ever promised, when he wrote that:

1 Coronavirus: Indoor dining, sports, weddings, funerals, travel to be hit as Dublin set for Level 3
2 Cluster among golfing group in Midlands a 'significant Covid-19 incident'
3 Life in Level 3: What will happen under new restrictions in Dublin?
4 Stephen Donnelly dodges the questions as Matt Cooper mercilessly pursues the answers
5 ‘We poured our hearts and souls into it’: Last orders as landmark pubs and restaurants sell up
6 English ‘chumocracy’: Boozy weekends and class disdain with the Camerons
7 NatWest considers closing Ulster Bank in the Republic
8 Coronavirus: NPHET recommends ban on indoor dining in Dublin
9 Coronavirus is out there, seeding widely, and things will get worse
10 East to get warmer as Ireland's climate to change dramatically by 2050
11 We pictured idyllic summers, colour schemes, playrooms for the kids. Then we saw the house
12 HSE turns down request from Britain to process tests in Irish laboratories
13 Diarmaid Ferriter: Agreements over Ireland are rare and should not be broken lightly
14 Remembering Jimi Hendrix 50 years on: the guitar god and the Irish connection
15 Mark Paul: Government faces dilemma on which businesses to save
16 Living with Covid plan: What is in each of the five levels?
17 Mixed messages and one-upmanship within Government need to stop
18 Fiona Bruce in a Spitfire is a Brexiteer’s fever dream
19 Garda allegedly shredded witness statement in murder inquiry
20 ‘I felt like I was just an incubator for Tusla’
21 Number of H1 grades would have been ‘untenable’ without standardisation - Foley
22 Ulster Bank could close, consumers remain cautious, and Decathlon booms
23 Trump envoy to Northern Ireland warns against hard border
24 Lack of enthusiasm for Joe Biden is a positive turn for America
25 First Chinese-born barrister called to the Bar of Ireland
26 ‘It is serious once more’: Austria announces strict coronavirus restrictions
27 My husband can go for a pint but can’t support me giving birth?
28 ‘Trumpite’ Boris Johnson wants EU to fail, former British diplomat says
29 Climate predictions for Ireland by 2050 come with unprecedented detail
30 Has NatWest finally run out of patience with Ulster Bank?
31 Covid-19 is ‘tearing at the guts’ of Irish in Australia. ‘We are trapped here’
32 Hilary Fannin: I console myself with a new pair of knickers
33 TikTok weighs plan for up to 5,000 workers in Dublin offices
34 ‘My parents are super-proud’: Dublin-based student name-dropped by von der Leyen
35 Tour de France offers magical escape but is it all make believe?
36 Almost 300,000 customers visited Decathlon since June opening
37 Blonde hair, blue eyes often not dominant characteristics of Irish Vikings, study finds
38 ‘I just thought it sounded exciting and different’
39 Paris in green beckons for Sam Bennett after passing final Alpine test
40 Germany, Poland added to updated travel green list but Italy, Greece removed
Real news has value SUBSCRIBE