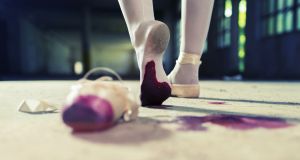 Erin Kelly’s Watch Her Fall is set in the hypercompetitive world of ballet. Photograph: iStock

It’s not often a crime novel references Henry James, EM Forster and Laurence Sterne, but Laura Vaughan’s debut, The Favour (Corvus, £14.99), is saturated in allusions to great art as it follows a group of wealthy students – “the Dilettani” – on a gap-year version of the Grand Tour.

Aspiring author Ada, once of the impoverished aristocracy but now reduced to living in London’s suburban hell, considers herself “a frustratingly unreliable narrator” in her own attempts to write, but she makes for an engaging guide to the wonders of Rome, Florence and Venice as the party bickers its way through Italy towards the tragic event that will define their lives for decades to come.

4 How supermarkets trick us into buying unhealthy food, and what we can do about it

7 Watt may seek to rein in Holohan

8 At home with Hilary Weston

11 Kathy Sheridan: The online threat to the integrity of Irish elections lies within

12 What is unionism without the union? The question has us spooked

17 Maternity leave during lockdown has its advantages

19 Dublin is fifth most expensive place for renters in Europe

20 What now for AstraZeneca and Johnson & Johnson vaccines?

25 On the centenary of Northern Ireland’s birth, let’s imagine a potential rebirth of Ireland

28 Everyday banking: Are we getting less but paying more?

29 Fintan O’Toole: Prince Philip - asylum-seeker and citizen of nowhere, but rich and white

31 Covid-19: AstraZeneca vaccine should not be given to patients under 60, Niac advises as appointments cancelled

34 Q&A: Where do we stand on AstraZeneca vaccine now it is restricted to over-60s?

36 Lena Dunham: ‘There’s so much judgment around bigger bodies, like bigger women are stupider’

37 Michael McDowell: Border poll talk is putting the cart before the horse