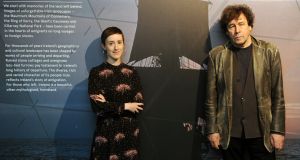 Correspondences is a small and unsettling book, edited by poet Jessica Traynor with Stephen Rea. It contains entries by 38 artists – mainly writers – representing pairings of established Irish artists including Paula Meehan, Theo Dorgan and Emilie Pine with individuals tied up in Ireland’s international protection system. This is the system by which people apply for status as refugees under international law. Correspondences describes itself as an anthology to call for an end to direct provision (DP). It joins a small number of initiatives which allow the inhabitants of the system to tell it their own way (others include the Asylum Archive project by Vukasin Nedeljkovic; Melatu Uche Ochorie’s short story collection This Hostel Life; and the beautiful MASI journal published this autumn to mark five years of the existence of the Movement of Asylum Seekers in Ireland).

Some of the pieces are bare bones accounts of the difficulties, tedium and cruelty of the DP system, ably framed by Bulelani Mfaco’s introduction which describes a series of individual and collective resistances to the system, from the establishment of MASI during a lock-out at the Kinsale Road DP centre in 2014, to the suicides which proved the only possibility of escape for certain residents. Mfaco observes, simply: “It has always been difficult to complain in direct provision.” An anonymous contributor from Zimbabwe agrees. “How can I call this place home,” she asks, “when I am even afraid to speak up?”