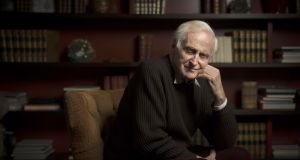 Werner Herzog once stated that you can’t be a filmmaker unless you have a regular reading habit. He, along with John Boorman, might be among the last of a dying breed: the director who reads for sustenance, who is as comfortable with an 800-page Russian novel as a 90-page screenplay. In line with William Goldman’s dictum that anyone involved in the film business had better write books on the side in order to keep themselves sane, Boorman has published several titles over the past 40 years: an Emerald Forest on-set diary, a memoir (Adventures of a Suburban Boy, 2003) and even a novel, Crimes of Passion, completed in his ninth decade. He’s also the co-founder and editor of Faber’s Projections series, and his books come bearing blurbs from the likes of Banville and Auster.

Boorman, now 87, is very much the lion in winter; although he might be better described as a fox, an ambitious but independent-minded filmmaker who navigated the Hollywood herd by stealth, resulting in a career characterised by masterpieces (Point Blank, Deliverance) cult oddities (Zardoz, Excalibur) and the occasional high-profile disaster (Exorcist II: The Heretic). Conclusions, his second memoir, bears the formal prose style of the refined older man, but there’s little of your high-faluting film theory here: the aspiring auteur will learn plenty about how to light a scene, scout a location, or outwit hostile governmental agencies, among the 1,001 other practical applications required to get film in the can.

1 Tuberculosis vaccine ‘potential game-changer’ in Covid-19 fight
2 What is Houseparty, the app everyone’s talking about – and not in a good way?
3 Irish woman in Sweden: No lockdown, little distancing, people still shaking hands
4 Mary Lou McDonald: This crisis shows that Sinn Féin was right
5 Coronavirus: Situation in Ireland ‘misrepresented’ because of limited testing
6 Coronavirus Q&A: How to shop safely during Covid-19
7 Remote control: Coronavirus is changing how Ireland is governed
8 Netflix has revealed its most-watched content. You might be surprised
9 We need to cancel the Leaving Cert and give students predicted grades
10 O’Brien may pull off $1.7bn Digicel debt write-off – but at what cost?
11 Acclaimed Connemara writer Tim Robinson dies at 85 from coronavirus
12 Fintan O’Toole on Tim Robinson: ‘One of the greatest writers of lands’
13 Are holidays booked for July and August going to happen?
14 Starmer poised to step centre stage as UK Labour Party leader
15 Covid-19: Cocooning elderly over 70 at risk of vitamin D deficiency
16 Coronavirus: Efforts to tackle nursing home outbreaks to be ramped up
17 Think you’re bad at video-conferencing? Boris Johnson is worse
18 Victory for Alan Kelly in Labour leadership contest as Aodhán Ó Ríordáin concedes
19 No signs of lock-down fatigue in Ireland ... yet
20 International Space Station returns to Irish skies on Friday and Saturday
21 ‘This is war’: Irish health workers on their Covid-19 crises
22 Cheltenham faces criticism after racegoers suffer Covid-19 symptoms
23 The Irish Times view on the pandemic: people expect to be levelled with
24 Coronavirus: About 600 private consultants in limbo after State deal
25 Ireland has strategy to ‘break the chains’ of coronavirus - WHO’s Mike Ryan
26 Meet the couple who dashed to get married just before the lockdown
27 Movies to stream right now: 10 great thrillers
28 Coronavirus: European solidarity sidelined as French interests take priority
29 Coronavirus: How to keep children happy, learning and entertained at home
30 Fish and chips: How to cook them just like the chipper does
31 Camile restaurant chain stops paying rents ‘to safeguard future’
32 Separated but living in the same house with our kids: ‘Not a couple, not room-mates’
33 Seanad election: Fianna Fáil on top as marathon count concludes
34 International Booker Prize 2020 shortlist announced
35 An Post sees big jump in people opening new current accounts
36 Coronavirus: Canada criticises Trump in row over protective masks
37 Covid-19: Westport braces for tough times ahead
38 Cork men quarantined in Vietnam after St Patrick’s Day party
39 The chickpea stew that broke the internet in the US is here. Give it a go
40 Tiger King: You wait years for just one animal-collecting weirdo, then half a dozen arrive at once
Real news has value SUBSCRIBE