Colm Tóibín on the life and brash times of David Hockney

Hockney emerges as infuriatingly egotistical, at times fiercely petulant and a hard working, brave artist in this second volume of biography 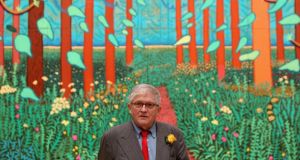 In the early 1980s, when David Hockney had been concentrating for a number of years on photography, and had been distracted by an intense involvement in set design for opera, he found himself one day in the Museum of Modern Art (Moma) in New York with a friend.

“Immediately before us,” the friend reported, “were some Cézanne landscapes, and to the side a Picasso and a Braque. Hockney was immediately struck speechless. ‘Oh dear,’ he sighed finally, taking a deep breath, ‘I truly must get back to painting.”’

This second volume of biography, which takes us from 1975 to 2012, finds Hockney mainly living in Los Angeles, and constantly involved in new projects and enthusiasms that kept him away from painting, and indeed from much else too. When a new assistant came to work with him, he told Hockney afterwards that he “didn’t know that [Hockney] worked”. The image he, like many others, had of the painter “was just life around the pool. Drugs and boys”.

This book makes clear how wrong that image was, and, despite all the temptations which California offered him, how deep-rooted Hockney’s work ethic and work rate were. Hockney often looked like a hedonist, and he spoke like one too, but when night fell, or when day broke, he was usually in his studio working.

One of his friends observed: “If everybody is asleep, he draws them sleeping, and if he’s alone, he draws his luggage lying on the floor. He’ll work until he drops . . . If David is tired of drawing, then he’ll take photographs; if he’s tired of taking photographs, he’ll paint; if he’s tired of painting, he’ll design an opera. He’s constantly thinking he hasn’t worked hard enough recently.”

Despite living almost like a hermit, in the work he made and in the way he projected himself, he liked to make a bigger splash, as one of his most famous paintings was called.

In 1981, the New York Times observed him in all his sartorial splendour: “He was wearing a red and yellow baseball cap over his blonde hair, dark baggy pants and jacket, a yellow and red striped shirt with a white collar and dark striped tie, a yellow watchband, white sneakers and a white handkerchief in his breast pocket.”

Instead, he remained almost too bright and too enthusiastic. It is hard to rate him as a painter. While his best work has a wonderful energy and brashness, and uses colour and line with remarkable panache and verve, his second-best work seems closer to illustration, and some other work of his appears like pastiche, almost badly and hastily made. He was also rather pleased with himself, and while this could be endearing, especially if he began working seriously using a new medium, it could also cause him irritation when his feelings of self-worth were not shared by others, such as the director of the Tate Gallery, Sir Norman Reid, who turned down the chance to acquire some Hockney paintings in the late 1970s: “I told Norman Reid he’s just a pathetic little shit,” Hockney said. “I said it to his face actually, and I found myself enjoying it!”

I began this book feeling the resentment that only the deeply envious, the truly middle-aged and those who never go anywhere can feel. It looked as though it was going to be 400 pages of listing who was at whose exciting party and their marvellous antics there. Instead, while indeed including such accounts, it manages a more serious portrait of a man who was driven to make images almost to the exclusion of everything else.

While Hockney emerges as infuriatingly egotistical, and at times fiercely petulant – there is an account of a trip to India in 1977, for example, in which he comes across as a spoiled child – he can also appear decent and loyal, kind and funny.

The book also allows Hockney’s dry wit to emerge. When he got an honorary doctorate, for example, and was asked how it felt, he said: “Take two aspirins and call me in the morning.” An inveterate smoker, he had a sign up in his studio: “Thank you for pot smoking.” And he hated anti-smoking laws: “You are dreary, absolutely dreary . . . You get rid of smoking and they are all on anti-depressant pills. . .They say smoking is bad for you, but they used to say the same about wanking.”

Hockney’s experimentation with faxes and photocopies and photographic collage are charted in detail in this book. When designing an opera, he listened with intensity to the music, despite his growing deafness. At the root of his personality there was a deep susceptibility, whether it was to California light or the sheer scale of the American landscape, or earlier painters whose work he admired, or to new technology. He seemed not to care much about what the critics said, even though the attacks on his work in London were increasingly stern and savage.

A free spirit, he was virulently opposed to bossiness. He disliked the Blairs, or “the fucking Blairs”, as he called them, as much as Mrs Thatcher, and he had no time at all for poor Gordon Brown whom he called “a dreary atheistic Calvinist prig, who I’m sure will never be elected in England.” When Hockney’s boyfriend and assistant John Fitzherbert was deported from the US in 2003 because he had outstayed his visa by one day on a previous visit, Hockney decided that he had had enough of America. He went back to England and to Yorkshire.

The feverish amount of painting he did on his return matches his enthusiastic response to California. This last section of the biography is the most absorbing as Hockney in his seventies becomes obsessed with applying what he had learned about colour and tone and texture in more exotic landscapes to Yorkshire seasons and Yorkshire light. Perhaps there were too many images and not enough slowness and suspicion in the breathless way he worked, but that had never been his style.

This second volume of biography shows how close he stuck to his style in all its brashness, openness and dexterity. It is oddly moving that the book ends in a sort of homecoming for this great English exile. The work was uneven but, like the man himself, oddly arresting and original and also, in its own way, inspiring and brave.

Kevin Bacon: ‘I was incredibly cocky and unwilling to take any advice’
3