Chris Frantz on Talking Heads: ‘David Byrne had a continual need to aggrandise himself’ 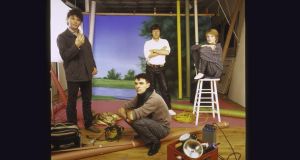 The name of the band is Talking Heads, the NYC outfit inspired from the mid-1970s onwards by punk and funk, yet which embraced such individuality they didn’t sound like anyone else. Remain in Love: Talking Heads, Tom Tom Club, Tina by Chris Frantz (White Rabbit, £20), is an insider’s account of the band’s formation and music, the author’s long-standing relationship with the group’s former bassist, Tina Weymouth, their dual position in another successful group, Tom Tom Club, and, hilariously, co-producing a Happy Mondays album (Yes Please!) in Barbados.

It’s more than just about these, however, but also Frantz’s opportunity to calmly comment on the nature of David Byrne’s perceived leadership of the band. One of the best asides is when he notes Byrne’s “seemingly continual need to aggrandise himself at the expense of his collaborators, as if their contributions were not as important as his”. With these observations (they veer between straightforward, sardonic and bemusing) it’s clear that Frantz is less interested in settling scores than setting the record straight, and because of this Remain in Love comes across as perceptive and not precious or pernickety.

1 ‘This was like a nuclear bomb’: More than 2,700 injured in Beirut explosion
2 Pubs to stay closed and restrictions to remain on all gatherings, Cabinet decides
3 Hume brought to Derry as candles in windows light his way
4 Europe braces for Covid-19 wave as Spain records 8,500 new cases over weekend
5 Trump flounders in interview over Covid-19 cases and deaths
6 Social worker overcomes poverty to graduate with master’s degree
7 Ireland needs to move to ‘zero-Covid’ policy to avoid catastrophe, scientists say
8 When Covid subsided, Israel reopened its schools. It didn’t go well
9 Covid-19: Even though now the trend is upward, it isn’t all bad news
10 Coronavirus experience shows how Greece’s weakness is its sunshine
11 Boy’s treatment by school over alleged thefts was ‘unbelievable’, judge says
12 Stirling and Balbirnie tee off to tee up another famous Ireland win over England
13 Novavax says Covid-19 vaccine induces immune response in small study
14 Vicky Phelan: Postnatal depression made me hate being a mother
15 Just a quarter of recent Covid-19 cases occurred in Dublin, officials say
16 Portumna publican’s frustration at boiling point following Government decision
17 Publicans warn they face ‘full-blown crisis’
18 John Hume obituary: Nationalist leader who championed ‘agreed Ireland’
19 Historians pay tribute: ‘Today we live in John Hume’s Ireland, and thank God for that’
20 Q&A: Pubs, travel and weddings – the Cabinet decisions
21 ‘I’ve had my butt kicked for the past three years’: Jamie Oliver on fame and failure
22 Restrictions threaten 147 unbroken years of Irish athletics history
23 Citizens in Brexit Britain clamour for German passports, study shows
24 Is that concealer you’re wearing, Mr President? The rise of men’s makeup
25 Elderly parents living in property you own will save you on capital gains tax
26 How safe is it to go back to the office?
27 24 hours in Bundoran: ‘The town is mental. No one expected it to be so busy’
28 John Hume: ‘He was our own Martin Luther King’
29 Fintan O’Toole: Supreme Court calls time on government waffle
30 Five of the best foundations to try as the world comes back to life
31 ‘A win like that is special and one we’ll remember forever’ - Ireland skipper Balbirnie
32 Deluge of appeals expected after predicted grades handed out in Scotland
33 Cabinet decision on outdoor events driven by concerns about travel
34 Why are there so many angry dads?
35 DUP’s Brexit ads: Who bankrolled the secretive £435,000 campaign?
36 Not for the birds: Keep your blueberries for these delicious oat slices
37 Shelbourne statues row a missed chance to debate decolonisation of public heritage
38 Dublinbikes annual charge to increase by 40 per cent
39 Róisín Ingle: I’m menstruating as I write this. And I’m mad as all bloody hell
40 Netflix: 10 of the best new shows and films to watch in August
Real news has value SUBSCRIBE