Call Him Mine: Dial M for murderous prose 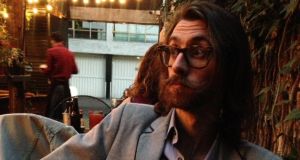 Tim MacGabhann: from Kilkenny to Mexico

“The verb is the writer sticking his nose in,” Elmore Leonard famously wrote in his rules for fiction. The award-winning American crime writer was referring to dialogue attribution – advocating the use of the word “said” – but it’s a good principle for verbs in general. Of course a strong, distinctive verb can do much to elevate a line, but the wrong verb can be worse than boring old “to be”.

From the opening pages of Call Him Mine, the debut from Irish writer Tim MacGabhann, his choice of verbs draws attention to the writing and takes the reader out of the story. Billed as a literary crime novel set in the dark heart of Mexico, the busy storyline – drug cartels, police corruption, murdered journalists, a love story, a quest for revenge, a second and underdeveloped love story – is made busier still with the choice of language.

1 One hundred Irish retailers for all your online Christmas shopping
2 Covid-19: Backlog forces HSE to skip calls to thousands of close contacts
3 ‘Groundbreaking’ direct provision replacement forecast to save millions
4 Michael McDowell: What exactly is the price of accepting this Nphet advice?
5 Suzanne Lynch’s US Election Diary: Trump ‘walks out’ of TV interview at White House
6 Covid-19 Explainer: Why is the contact tracing system getting swamped?
7 ‘My sister preys on people’s weaknesses, and causes nothing but trouble’
8 Golf in Level 5 Covid restrictions: Clubs still waiting to hear if they can remain open
9 How long can Government afford to keep State pension age at 66?
10 School ordered to reopen after closing due to Covid-19 fears
11 Brexit: UK government suffers heavy defeat over ‘law-breaking’ Bill in House of Lords
12 Gordon D’Arcy: Ireland don’t need to do a Finn Russell on it
13 People who throw house parties can be fined €1,000 and jailed for up to a month under planned law
14 Life under Level 5: What will the next six weeks look like for the State?
15 Much of what we think about Covid-19 is wrong. We need to change the conversation
16 Kevin Bacon: ‘I was incredibly cocky and unwilling to take any advice’
17 New Zealand records 25 Covid cases as foreign fishing crews arrive
18 'It’s his dishonesty, lack of character, his deceit' - ex-CIA chief excoriates Trump
19 Covid-19: Six weeks of lockdown hardship offers little by way of end reward
20 Hugo Keenan could start in changed Ireland team against Italy
21 Miriam Lord: Dáil reeks of alcohol but Irish politics will not be sanitised
22 An Post letter business collapsing under Covid-19 - CWU
23 Removing Catholic symbols and practices from State schools no easy task
24 Covid-19: State moves to Level 5 for six weeks with hopes of ‘meaningful’ Christmas celebrations
25 Schools should not reopen after midterm unless safety improves, say unions
26 ‘Absolutely imperative’ Deis school stays open amid Covid - principal
27 More than 200 of Ireland’s birds of prey were poisoned, finds study
28 Fines for Covid-19 breaches can influence behaviour but will people pay them?
29 Support bubbles: Everything you need to know
30 Oaktree joins forces with Johnny Ronan on Irish Glass Bottle site
31 Trump has bank account in China and pursued business there, say records
32 Covid-19 public spending unsustainable without vaccine – Donohoe
33 Six weeks of Level 5: Non-essential shops to close, no visitors to homes and a 5km travel limit
34 Ulster Bank to meet Paschal Donohoe to discuss bank’s future
35 No underage or minor GAA to be allowed under Level 5 Covid-19 restrictions
36 Aki, Ringrose and Henshaw: Brian O’Driscoll has his say on Ireland’s midfield riddle
37 Lockdown take-aways: Here's the pick of Dublin's restaurant meals to go
38 Michael Harding: The tree that broke my heart will be born again
39 Substantial internal criticism of Level 5 decision from backbench FF, FG TDs
40 Fintan O'Toole: State bumbling along with ad hoc decision-making as Covid crisis worsens
Real news has value SUBSCRIBE